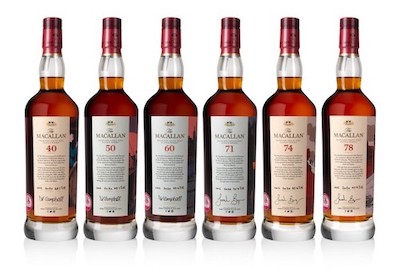 Sotheby’s and The Macallan have unveiled The Red Collection, a group of single malts that includes a bottle that has been matured for 78 years.

The whisky will be auctioned by Sotheby’s in London on October 31 after being gifted by The Macallan to City Harvest to raise funds for the food charity which redistributes surplus from to vulnerable people across London.

Sotheby’s said the 78 year-old whisky is the oldest bottle ever released from The Macallan Distillery and the oldest “age statement” whisky ever offered at auction.

A whisky’s “vintage” refers to the year the spirit was distilled — its “age statement” denotes length of time it has been matured for in oak casks.