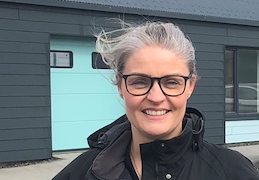 Joanna Peteranna is to take up the role of interim area manager for Highlands and Islands Enterprise (HIE) in the Outer Hebrides.

Peteranna is a chartered manager and in 2015 completed the Entrepreneurial Development Programme at the prestigious Massachusetts Institute of Technology (MIT) in Boston.

She takes over from Rachel Mackenzie who leaves HIE on September 17 to become the finance director of Gaelic media service MG Alba after eight years with the organisation.

“Joanna has played a key role in a wide range of developments across the Outer Hebrides, working closely with public and private stakeholders,” said HIE.

“More recently, she was responsible for the agency’s involvement in maximising the benefits from a series of planned major investments in and around the southern islands of the Outer Hebrides.

“Born and brought up in Paisley with a North Uist family, Joanna worked for Bank of Scotland in Edinburgh before settling in Benbecula in 2002.

“She went on to work in the private and third sectors and joined HIE as a manager for Uist and Barra in 2012.”

Peteranna said: “I am delighted to be taking up this interim appointment and leading the Innse Gall team in its continued work in supporting our communities and businesses to recover from the pandemic.

“Although it is a time of challenge for the economy, there is a lot to be positive about with the delivery of the Islands Deal projects, the Stornoway Port redevelopment and a major new distillery in Benbecula.”

HIE CEO Carroll Buxton said: “With her experience in economic and community development, Joanna will make an excellent addition to the team of area managers.

“She brings a wealth of invaluable knowledge from one of our highest priority areas and she is well placed to lead the area team.

“I am very pleased she has taken on the role.”