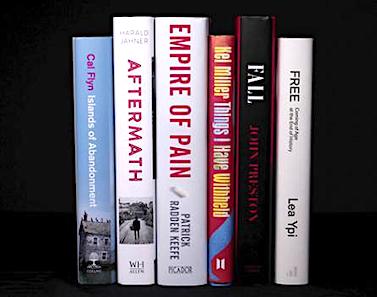 The shortlist for this year’s £50,000 Baillie Gifford Prize for Non-Fiction has been announced at the Times and Sunday Times Cheltenham Festival of Literature.

The titles on this year’s shortlist are:

The winner will be announced on November 16.

In Island of Abandonment: Life in the Post-Human Landscape, Cal Flyn examines the places left behind when humans have gone — ghost towns, exclusion zones, no man’s lands and fortress islands — to consider what happens after all the people have gone — and how far can the damage to nature be undone?

Aftermath: Life in the Fallout of the Third Reich, 1945–1955 by Harald Jähner (translated by Shaun Whiteside), sheds new light on the complex relationship between the victors and vanquished in Germany in the decade after the Second World War.

New York Times bestseller Empire of Pain: The Secret History of the Sackler Dynasty by Patrick Radden Keefe is an investigation of the greed and indifference to human suffering that built one of the world’s greatest fortunes.

Things I Have Withheld by award-winning poet and novelist Kei Miller is a collection of essays that uses bodies and the histories our bodies inherit to examines everyday acts of racism and prejudice.

The shortlist is completed by Free: Coming of Age at the End of History by Lea Ypi, a memoir that describes how the seismic political rupture that took place in Albania after the collapse of the Berlin Wall challenged the author’s beliefs about freedom — and even reality itself.

Holgate said: “I’m not sure I’ve ever been on a judging panel on which I’ve felt so invigorated and excited by the shortlist as I have on this Baillie Gifford Prize panel.

“Every one of these books is an enveloping read.

“There’s attack here, deep learning, challenge, keen analysis and revelation, but above all, there is outstanding storytelling, and deep pleasure to be had in reading all six of the books on this list.”

Last year’s winner was Craig Brown for One, Two, Three, Four: The Beatles in Time, which went on to become Number 1 on The Sunday Times Bestseller List.