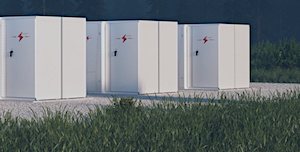 The facilities at Hunterston and Kincardine are due to be operational in April 2024 and will comprise two 400 MW battery facilities.

Amp Energy said the facilities will be the “two largest grid-connected battery storage facilities in Europe.”

Amp Energy calls itself “a high-growth disruptor at scale” which is backed by investments from institutional partners including most recently the Carlyle Group which invested $374 million into the company in late 2020.

“By storing and managing the dispatch of renewable energy generated from Scottish windfarms, the projects are future-proofing the UK’s electricity infrastructure at a fraction of the cost of expensive transmission upgrades,” said Amp.

“Over the coming years, Amp’s Scottish battery facilities will enable up to 1,750 GWhrs per year of additional renewable energy to be generated in Scotland and transported to other regions of the UK, equivalent to enabling approximately 500 MW of new offshore wind deployments.”

“Our projects not only support the growth of renewable generation in Scotland but also provide an alternative to costly transmission upgrades for consumers.”

Amp chief investment officer Paul Ezekiel said: “The UK electricity grid is in the process of transitioning to a greener net-zero market.

“This has only been accelerated with the recently awarded addition of 25GW of offshore wind licenses as part of the ScotWind offshore wind leasing program.

“The deployment of Green Hydrogen and utility-scale energy storage, such as the Scottish Green Battery Complex, is critical to our continued rapid growth and long-term strategy.”