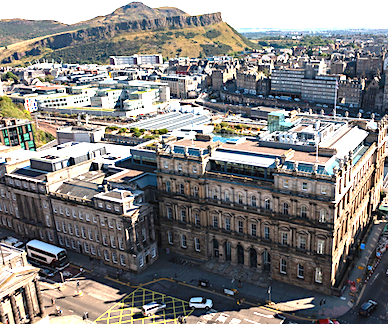 Investment into Scottish commercial property reached £2.2 billion in 2021 according to the latest Scotland Snapshot from Colliers.

“There were particularly high levels of activity in the retail warehouse sector which reached £300 million, 75 per cent above the 10-year average,” said Colliers.

“While shopping centre investment remained almost 40 per cent below the 10-year average it did reach a five year high of £160 million – the last four years recorded volumes of below £50 million.

Patrick Ford of the National Capital Markets team at Colliers Scotland, commented: “Last year we saw a real return in investment activity across all sectors following a quiet 2020.

“Prime assets such as Waverleygate and Aurora generated strong interest and we’ve seen a competitive bid process return, particularly for well located, best in class office assets such as these.”

Yields firmed by around 100 bps in 2021 as demand remained strong and supply reduced.

Elliot Cassels, also of the National Capital Markets team at Colliers Scotland, said: “Industrial and distribution remains the best performing sector in the Scottish property market and the rest of the UK.

“With the rising cost of new builds and strong evidence of rental growth, there has been an overall structural change and a high demand for warehousing.

“The rise in e-commerce and the effects of COVID-19 has accelerated this change and has resulted in positive investor demand from both domestic and overseas capital.

“However, within the Scottish market there has been limited prime offerings and the market has been starved of product, with most prime transactions occurring south of the border.”

In the alternatives, mixed use and hotels sector the combined investment total hit £760 million in 2021, 50% above the 10-year average for £510 million.

Ford added: “The broad level of appetite, which was followed up by tangible investment into Scottish commercial property last year gives me high hopes for the coming year.

“As travel opens up, we’re looking forward to welcoming capital from Asia and the Middle East back to Scotland, many of whom have a significant amount of capital to allocate.