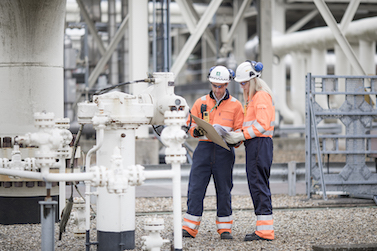 National Grid will receive £2.2 billion in cash and £2 billion from additional debt financing at completion.

National Grid said it intends to use proceeds of £4.2 billion towards repayment of the bridge financing facility that was drawn as part of its acquisition of Western Power Distribution.

“The transaction constitutes a class 2 transaction for the purposes of the UK Financial Conduct Authority’s Listing Rules and, as such, does not require National Grid shareholders’ approval,” said National Grid.

The terms of the transaction imply an enterprise value for NGG of £9.6 billion.

Following the transaction, National Grid will own a 40% minority equity interest in NGG via a new holding company called GasT TopCo.

National Grid said it also entered into an option agreement with the consortium for the potential sale of the remaining 40% of equity in GasT TopCo.

“The option may be exercised by the consortium between 1 January 2023 and 30 June 2023 (subject to change depending on the timing of the closing of the transaction),” said National Grid.

“If the option is exercised, the consideration for the further interest is expected to be paid in cash to National Grid on broadly similar terms to the transaction, subject to adjustment for dividends paid in the business at the time of exercise.

“Further details will be announced if the option is exercised.”

National Grid CEO John Pettigrew said: “This transaction further enhances our role in delivering the UK’s energy transition, pivots our portfolio towards electricity, whilst ensuring the security of the energy supply for the country.

“Alongside our plans to invest up to £35 billion in energy infrastructure over the next five years, the series of transactions announced last March will strengthen our long-term growth prospects, and drive long-term value for shareholders.

“Today’s announcement is a strong result for all our stakeholders, including employees and customers.

“The consortium has a long-term commitment to the UK with significant experience in owning and operating infrastructure assets.

“I look forward to our partnership and continuing to deliver safe and reliable gas service at the least cost to consumers.

“I would also like to thank my colleagues in gas transmission and metering for their hard work that has helped us reach this important milestone.”

Martin Bradley, Head of Macquarie Asset Management’s Real Assets team in EMEA, said: “The national transmission system is a critical enabler of the UK’s energy transition, providing the flexibility and reserve energy needed in the electricity system as the deployment of renewable sources of generation accelerates.

“However, if the UK’s net-zero by 2050 target is to be met, the country must have a next-generation transmission backbone to power homes and businesses with renewable energy.

“Backed by our significant investment, the transmission system will play a leading role in making the network ready for this transition.

“In doing so it will support the expansion of hydrogen’s role in the energy mix to deliver a competitive edge to the UK and its industry, while working closely with the Government and Ofgem to maintain security of supply.”

“We believe National Grid’s innovative decarbonisation strategy will ensure the business plays a leadership role in supporting the UK to achieve net zero carbon emissions on target by 2050, while meeting consumer demand for reliable networks.”