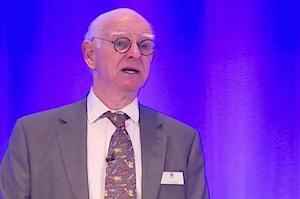 The chairman of NatWest Group, the bank formerly known as RBS, told shareholders at the company’s AGM in Edinburgh on Thursday that the company “deeply regret that we failed adequately to monitor one of our customers between 2012 and 2016 to prevent money laundering.”

The case related to £365 million deposited into the account of Bradford jeweler Fowler Oldfield between 2012 and 2016.

Fowler Oldfield was shut down following a police raid in 2016.

“We deeply regret that we failed adequately to monitor one of our customers between 2012 and 2016 to prevent money laundering.

“And while the case has now come to an end, we continue to invest significant resources in the ongoing fight against financial crime and fraud.

“It has been a period of stability in terms of board composition, with no changes to our membership since the 2021 AGM.

“As you would expect, we keep the composition, skills and experience of the board under review, and over the next year or so we will need to recruit new members to cope with planned retirements.”

Shareholders voted in favour of all resolutions put forward at the AGM — including 92.75% in favor of the directors’ remuneration policy, despite the efforts of shareholder advisory firm Glass Lewis, which recommended investors vote against the pay plan.

However, the re-election of NatWest Markets chairman Frank Dangeard “by independent shareholders only” received only 56% of the votes cast.

NatWest said: “The board understands however that some shareholders have expressed concerns regarding the number of directorships that Mr Dangeard holds.

“The chairman intends to engage with and listen to shareholders to understand their concerns.

“Mr Dangeard brings considerable business experience and global expertise to the board.

“Mr Dangeard attended all scheduled board and committee meetings during the year.

“The board is entirely comfortable that Mr Dangeard is able to devote sufficient time to his duties and greatly values his contribution.”