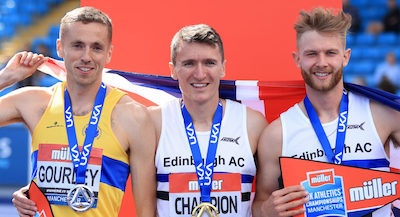 Scottish Athletics said that 10 Scots have been selected for the Great Britain and Northern Ireland team to compete at the World Athletics Championships in Oregon next month.

It said the number could rise further once those with high places in the world rankings are considered over the next 48 hours when updated lists are confirmed.

Scots will make up the full complement in the men’s 1500m team with Jake Wightman, Neil Gourley and Josh Kerr all selected.

Andy Butchart is selected for the fifth time for a global championship event in the 5000m and Zoey Clark will be part of the 4x400m relay squad again.

In total, the British Athletics team numbers 64 athletes for the event in Eugene, Oregon.

(Alphabetical order, with event and coach)

“It’s a huge achievement and on these occasions we also want to thank clubs who have played a key role in their development over many years,” said Scottish Athletics.

“A number of the athletes continue to reference their initial club on a regular basis when competing at elite level.