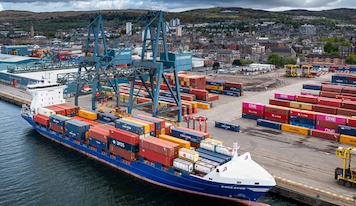 Peel Ports has announced that the first-ever direct freight container service connecting China and Scotland is being launched in response to growing global pressures on the supply chain.

“The move will provide Scottish importers and exporters with a direct port of call and eliminate decades of frustrating issues with transshipments and major delays at other European ports,” said Peel Ports.

“The direct sailings will almost halve the transit times, compared to feeder services via continental Europe or other southern UK ports.”

“China Xpress is one of the most significant developments in the UK, especially Scotland’s shipping industry, for many years.

“The opportunities and benefits are endless, and this trade link could not have come at a better time for Scottish businesses.

“I’m constantly being told about the frustrations of delays at European ports, which hamper business operations and relationships for many.

“These frustrations will significantly reduce as a result of the China Xpress service.”

Jim McSporran, Clydeport Director at Peel Ports, said: “It will be a really proud moment when we welcome the first direct container service connecting China and Scotland to Greenock Ocean Terminal.

“It’s a real vote of confidence that we have been chosen for this connection, which will improve the service for our customers.

“These direct services will reduce transit times and delays and prove to be a real boost to the wider supply chain.

“Greenock Ocean Terminal offers the flexibility to handle increased cargo volumes and we look forward to working with KC Liner Agencies, DKT Allseas and China Xpress on this momentous partnership.”

It will lead to three sailings per month in each direction, calling at Ningbo, and the Chinese city of Shenzhen, before arriving in Greenock via its “sister” container terminal at the Port of Liverpool.

The new service aims to cut the journey time from approximately 60 days to an estimated 33 days by eliminating unscheduled port congestion delays in Rotterdam, and the route will be operated by six ships of about 1,600TEUs (twenty foot equivalent units).

This is set to provide an export boost for the food and drink sector in particular, including prestigious whisky brands as well as the oil and gas sector which will benefit from the sales of machinery and pipes from Scotland.

Milne added: “I am encouraged that Scotland’s industries now have a solution to ensure commerce, products and trade in and out of Scotland, have an effective and competitive way forward.”

The new route is more good news for Greenock, one of Scotland’s main cruise ports, which is also experiencing its busiest year for cruise ship numbers since before the pandemic.

Ship visits are expected to double this season, with 74 cruise liners booked into the Inverclyde town’s new, dedicated pontoon across 2022.

Peel Ports also recently announced it will install two new cranes on the site in the largest single investment made at the container terminal since it opened in 1969.

The west-facing freight port has been at the heart of Scotland’s shipping industry since 1876.

Peel Ports is a partner in the Clyde Green Freeport bid along with AGS Airports’ Glasgow Airport, Mossend International Railfreight Park in North Lanarkshire and a partnership of the Glasgow City Region councils.