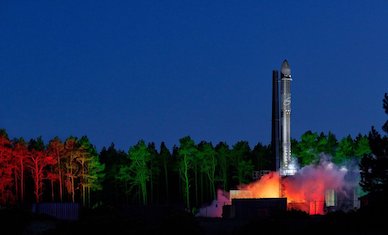 Orbex, the Scottish rocket manufacturer and orbital launch services provider, said it will build and operate the first vertical launch site for satellites on the UK mainland.

Orbex, based in Forres, Moray, said it signed a lease with development agency Highlands and Islands Enterprise (HIE) for the spaceport location on community-owned land on the A’ Mhoine peninsula in north-west Sutherland.

HIE has been developing launch plans for several years and leases the site from Melness Crofters’ Estate.

The sub-lease with Orbex will run for 50 years, with an option to extend for a further 25 years.

Orbex will oversee the construction and assume full operational management of the new facility.

The 10-acre launch site will become the long-term “home” spaceport of Orbex and will see the launch of up to 12 orbital rockets per year, carrying satellites into low Earth orbit.

Total private investment over the initial three-year period is expected to reach £20 million.

In addition to increased opportunities for local businesses and contractors as part of the spaceport’s construction, Orbex expects to create up to 40 technical and non-technical FTE jobs to support the operation and maintenance of the site.

With the backing of the UK Space Agency, HIE set to work developing plans for the Sutherland spaceport in 2018, with specialist input from architects NORR and construction consultants Gardiner and Theobald.

At the same time, HIE commissioned detailed environmental studies to inform a broad range of protection measures around the site.

Planning permission was granted by the Highland Council in August 2020. A separate development application to the Scottish Land Court – which was required as the launch site is on crofting land – was also successful.