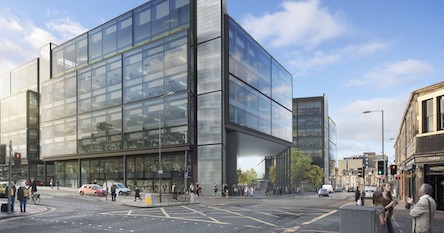 Edinburgh-based investment giant Baillie Gifford is to move its headquarters from Calton Hill at the east end of Princes Street to a new £350 million office block at Haymarket in the west end of the Scottish capital.

Qmile Group said Baillie Gifford has agreed to take the Grade A accommodation on a 20-year lease and will relocate to its new head office in the latter half of 2023.

Baillie Gifford has assets under management and advice of around £260 billion and its high-profile funds are major shareholders in prominent global companies including Tesla, Amazon, Tencent, Netflix and Alibaba.

“It will bring all our Edinburgh colleagues under one roof again, in a more flexible and dynamic working environment.

“This will help to support our staff and clients around the world, whilst providing space for further growth.”

Haymarket Edinburgh will provide more than 380,000 sq ft of Grade A office space with Baillie Gifford’s accommodation located within a seven-storey building.

Martin Towns, Head of UK Commercial at M&G Real Estate, said: “As one of the world’s largest commercial property investors with significant capital at our disposal, we are ideally placed to acquire and regenerate a project of this scale.

“Our environmental, social and governance (ESG) credentials and expertise will ensure this site is transformed into a new, world class public realm for the local community and sustainable office space for the most exacting modern occupiers.

“For our customers and clients, this development represents a key asset with potential for sustained income and strong capital appreciation in a targeted growth zone.

“We are very pleased that Baillie Gifford has chosen Haymarket Edinburgh and we look forward to welcoming them in due course.”

“Haymarket Edinburgh is without doubt a high profile development and represents the total regeneration of a site which has been derelict for more than 52 years.

“To attract an occupier of the size and stature of Baillie Gifford at such an early stage in the development of the site is hugely exciting.

“We look forward to working closely with the Baillie Gifford team to deliver their new head office.

“Construction work has restarted at Haymarket Edinburgh in line with Scottish Government guidelines and the development is progressing well.

“We are on our way to making our vision for Haymarket Edinburgh a reality by delivering a place designed to be inclusive for the benefit of both the local community where it is being built and city’s business community.”

M&G Real Estate and Qmile Group were advised on the agreement by property consultancies JLL and Savills, whilst Ryden acted on behalf of Baillie Gifford.