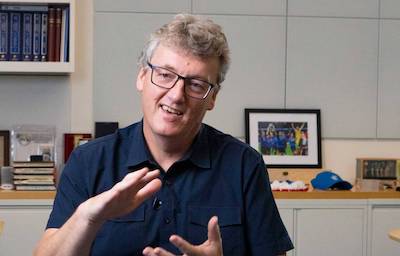 Scottish-born Princeton University professor David MacMillan has been awarded the 2021 Nobel Prize in chemistry “for the development of asymmetric organocatalysis.”

He shares the award with Benjamin List of the Max-Planck-Institut für Kohlenforschung, Mülheim an der Ruhr, Germany.

MacMillan was born in Bellshill in 1968 and gained his undergraduate degree in chemistry at the University of Glasgow in 1991.

MacMillan then went on to doctoral studies at the University of California, Irvine, before taking on a postdoctoral position at Harvard University.

He began his independent career in 1998 at the University of California, Berkeley, before moving to the California Institute of Technology.

In 2006, he was named the A. Barton Hepburn Professor of Chemistry at Princeton University. From 2010-2015, he served as the chair of the Chemistry Department at Princeton.

He is currently the James S. McDonnell distinguished university professor of Chemistry at Princeton University.

The Royal Swedish Academy of Sciences said: “Building molecules is a difficult art.

“Benjamin List and David MacMillan are awarded the Nobel Prize in chemistry 2021 for their development of a precise new tool for molecular construction: organocatalysis.

“This has had a great impact on pharmaceutical research, and has made chemistry greener.”

Princeton University President Christopher Eisgruber said: “David MacMillan is a brilliant chemist whose transformative insights and accomplishments have enhanced the power of organic chemistry to benefit human health and address other practical problems.

“He is also a faculty leader who during his time at Princeton has worked with colleagues to build this University’s Department of Chemistry into one of the world’s best.

“All of us at Princeton are thrilled to celebrate this well-deserved honor.”

MacMillan is also a leader in the field of photoredox catalysis, which uses light to break and rejoin atomic bonds, one electron at a time.

“Dave is the most innovative, progressive and impactful investigator currently working in the area of synthetic organic chemistry,” said Greg Scholes, chair of the Princeton University Department of Chemistry.

“Over the past 18 years, he has created two large and active fields of research: asymmetric organocatalysis and photoredox catalysis.

“His accomplishments over this period of time are unrivaled, and we are beyond thrilled.”

MacMillan said: “I am shocked and stunned and overjoyed.

“It was funny because I got some texts from people in Sweden really early this morning, and I thought they were pranking me so I went back to sleep.

“Then my phone starting going crazy.”

MacMillan told STV news: “My phone was going ballistic and sure enough, I went downstairs and looked at the
front page of the New York Times.

“And it was on the front of the New York Times so, I was like this is either an incredibly elaborate hoax or I’ve actually won this thing so I went and woke up the family.

“I don’t think I can use the words you can use on TV but in terms of how I felt, it was just the most jaw-droppingly shocking, like almost you can’t begin to understand what is going on.

“I managed to call my sister back in Bellshill and she was crying her eyes out and that was incredibly special and yeah, then I couldn’t use my phone after that cause there was just so much going on I just had to switch it off.”

Professor Justin Hargreaves, head of the University of Glasgow’s School of Chemistry, said: “Huge congratulations to Benjamin List and David MacMillan on receiving the 2021 Nobel prize in chemistry for their work on organic catalysts.

“We’re particularly thrilled for David, who undertook his undergraduate degree in chemistry here at the University of Glasgow.

“He has maintained links with the School of Chemistry in the years since, including offering bursaries to support students, for which we’re very grateful.

“They are some of the most accomplished chemists of their time, and we’re delighted that the Royal Swedish Academy of Sciences has chosen to place David among them.”