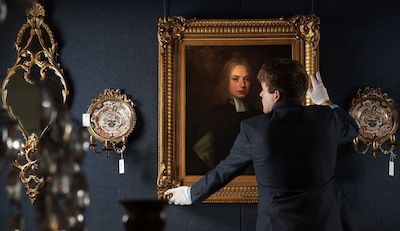 A rare, early portrait of Anglo-Irish author Jonathan Swift is to be auctioned live online from Edinburgh by fine art auctioneers Lyon & Turnbull on May 18.

The portrait is thought to have been painted around 1682.

Swift is believed to be 16 years old and a student at Dublin College in the painting, which is attributed to the Irish artist Thomas Pooley (1646–1723).

The work was acquired in 1801 by Thomas Percy, Bishop of Dromore, County Down, who recorded it as “a small portrait of Dean Swift.”

First exhibited at South Kensington in 1867, the portrait drifted in and out of public view for the next 100 years.

In 1898, Sir Leslie Stephen, writing in the Dictionary of National Biography, said: “the present whereabouts of this portrait is unknown.”

It reappeared around 1967 in the collection of a descendant of Thomas Percy.

At this time, the portrait came to the attention of Swift scholars and was attributed to Pooley.

Pooley painted many high society figures in Ireland during the second half of the 17th century and at the start of 18th century, contributing to the theory that Swift was the illegitimate son of his benefactor Sir John Temple (1600-1677).

Temple was an influential Irish lawyer, courtier and politician.

Nick Curnow, Head of Fine Art at Lyon & Turnbull, said: “This is a remarkable painting of a literary giant of whom few likenesses exist.

“Swift is very self-assured sitter for a young man and the work has a presence and immediacy that so many 18th century portraits lack.”

The company’s Rare Books Specialist Dominic Somerville-Brown said: “Swift has an enduring hold on readers’ imaginations and an indisputable place in the literary canon.

“However, his legacy is not matched by a profusion of images, especially given the era in which he lived.

“This portrait being auctioned is therefore very exciting and I will be on tenterhooks when bidding begins.”