Veteran Scottish investment banker Angus Grossart has died at the age of 85 after a short illness.

Edinburgh-based merchant bank Noble Grossart confirmed its chairman died at home on Friday with his family by his side.

“It is with profound sadness that we announce that Sir Angus McFarlane McLeod Grossart has passed away peacefully at home in Edinburgh on the May 13 with his family by his side after a short illness,” said Noble Grossart.

Grossart grew up in Carluke, South Lanarkshire, and trained in law at Glasgow University.

He jointly founded Noble Grossart in 1969 and served as a director of several major public companies.

First Minister Nicola Sturgeon said: “I am deeply saddened to hear of the passing of Sir Angus Grossart.

“Sir Angus was a titan of Scotland’s business community and made a significant contribution to the arts, culture and public life.

“My deepest sympathies go to Gay and her family at this sad time.”

“He will be greatly missed by friends and family and by the many organisations, public and private, which have benefited from his wit and wisdom.”

“His loss will reverberate far beyond these shores and with an incalculable number of people.”

Scottish Financial Enterprise chair Philip Grant said: “The world of Scottish finance is marking the passing of a giant of our industry.

“Among his many other achievements, Sir Angus was one of the founders of Scottish Financial Enterprise.

“He made an enormous contribution to business, finance, the arts and culture in Scotland, and his leadership and wise counsel will be missed by all who knew him.

“On behalf of SFE and our membership, our sincerest condolences go to his family.” 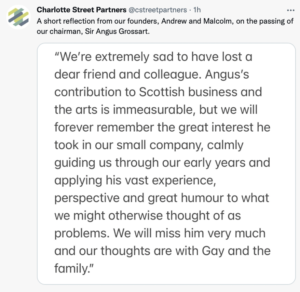