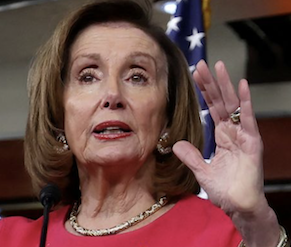 US House of Representatives Speaker Nancy Pelosi has warned the UK government there could be no US-UK trade deal if the UK proceeds with plans to unilaterally scrap some of the rules of the Northern Ireland Protocol.

The UK warned European Union authorities this week that it could discard the post-Brexit regulations negotiated with the EU including border checks on some goods shipped from Great Britain to Northern Ireland.

Pelosi’s warning came as Scotland’s First Minister Nicola Sturgeon met Sinn Fein vice-president Michelle O’Neill at Bute House in Edinburgh “to discuss shared areas of interest including … the importance of the Northern Ireland Protocol negotiated with the EU and the prospects for the formation of a new Northern Ireland Executive.”

Pelosi said in a statement: “The Good Friday Accords are the bedrock of peace in Northern Ireland and a beacon of hope for the entire world.

“Ensuring there remains no physical border between the Irish Republic and Northern Ireland is absolutely necessary for upholding this landmark agreement, which has transformed Northern Ireland.

“It is deeply concerning that the United Kingdom is now seeking to unilaterally discard the Northern Ireland Protocol.

“Negotiated agreements like the Protocol preserve the important progress and stability forged by the Good Friday Accords, which continue to enjoy strong bipartisan and bicameral support in the United States Congress.

“As I have stated in my conversations with the Prime Minister, the Foreign Secretary and Members of the House of Commons, if the United Kingdom chooses to undermine the Good Friday Accords, the Congress cannot and will not support a bilateral free trade agreement with the United Kingdom.

“Respectful of the will of the British people and of Brexit, I urge constructive, collaborative and good-faith negotiations to implement an agreement that upholds peace.

“The children of Northern Ireland, who have never known the bloody conflict and do not want to go back, deserve a future free of the violence where all may reach their fulfillment.”

Sturgeon said of her meeting with O’Neill: “Today’s meeting was an excellent opportunity to discuss some of the shared challenges Scotland and Northern Ireland face and I thank Michelle for reaching out and enabling us to discuss these extremely important issues in person.

“It was a particularly timely conversation which provided an update on the ongoing developments around establishing the Northern Ireland Assembly and Executive following elections earlier this month.

“We also discussed the Northern Ireland protocol – most notably the extremely concerning announcement by the UK Government that they intend to legislate to enable unilateral action to dis-apply parts of the protocol – and the incredibly damaging effects this would have in communities right across the UK.

“In a cost of living crisis and teetering on the edge of recession, pitching us into a trade dispute with the EU could be what tips us over.

“Intergovernmental relations are essential when it comes to tackling shared challenges and it is clear that much more needs to be done by the UK Government to ensure a rapid and effective response to the devastating cost of living crisis facing households across these islands.

“No one should ever have to make a choice between heating and eating.

“Today’s meeting was a further example of the close relationship between Scotland and Northern Ireland.

“In that spirit, I have written today to the leaders of the DUP and Alliance parties with an offer to meet to discuss these important matters.”

O’Neill said: “I was delighted to visit Scotland today to meet Scotland’s First Minister, Nicola Sturgeon, to discuss a number of shared priorities and to update her on political developments at Stormont.

“This included the cost-of-living crisis which is bearing down hard on workers and families, and the need for action by our administrations.

“We also discussed the need to ensure the Government in London protect people struggling with soaring costs where we don’t have the powers to act.

“I updated the First Minister on our recent elections, and the overwhelming demand from the electorate who have given the parties a mandate to get the Assembly and Executive up and running without further delay.

“The public want us to unlock the £420 million sitting in the Executive’s bank account to support households, and to agree a budget which will invest an extra £1 billion in our health service …

“Both Scotland and the island of Ireland held membership of the EEC and EU from 1973.

“We enjoyed the enormous benefits of our membership until the north of Ireland and Scotland were dragged out of the EU as a result of the Tory Brexit without our consent, and against the democratically expressed wishes of our people.

“Six years on from the referendum the implications are being felt acutely.

“The historic bonds between Scotland and the island of Ireland go back centuries.

“We enjoy a long and enduring affinity, as close neighbours and good friends.

“Moving forward I am determined to strengthen the bond that ties us – politically, culturally and economically – so that our administrations can work together in our shared interests through strong intergovernmental relations.”