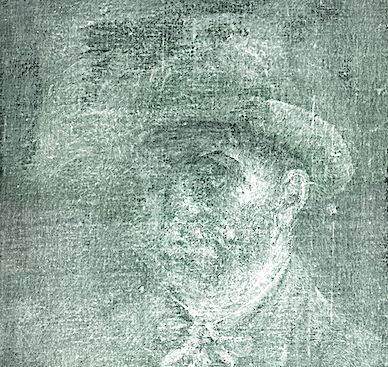 The National Galleries of Scotland (NGS) announced it has discovered what is “almost certainly” a previously unknown self-portrait by Vincent van Gogh.

The mysterious image was revealed by an x-ray taken when art conservators examined Van Gogh’s Head of a Peasant Woman of 1885 ahead of the forthcoming exhibition A Taste for Impressionism (30 July–13 November) at the Royal Scottish Academy, Edinburgh.

Visitors will be able to see the amazing x-ray image for the first time through a specially crafted lightbox at the centre of the display.

“Hidden from view for over a century, the self-portrait is on the back of the canvas with Head of a Peasant Woman and is covered by layers of glue and cardboard,” said NGS.

“NGS experts believe these materials were applied ahead of an exhibition in the early twentieth century. Van Gogh often re-used canvases to save money.

“However, instead of painting over earlier works, he would turn the canvas around and work on the reverse.

“It may be possible to uncover the hidden self-portrait, but the process of removing the glue and cardboard will require delicate conservation work.

“Research is ongoing as to how that can be done without harming Head of a Peasant Woman.

“Until then, the world can enjoy the tantalising discovery through a ghostly and utterly compelling x-ray image.

“It shows a bearded sitter in a brimmed hat with a neckerchief loosely tied at the throat. He fixes the viewer with an intense stare, the right side of his face in shadow and his left ear clearly visible.”

Professor Frances Fowle, Senior Curator of French Art at the National Galleries of Scotland, said: “Moments like this are incredibly rare. We have discovered an unknown work by Vincent van Gogh, one of the most important and popular artists in the world.

“What an incredible gift for Scotland, and one that will forever be in the care of the National Galleries.

“We are very excited to share this thrilling discovery in our big summer exhibition A Taste for Impressionism, where the x-ray image of the self-portrait will be on view for all to see.”

Head of a Peasant Woman entered the NGS collection in 1960, as part of the gift of an Edinburgh lawyer, Alexander Maitland, in memory of his wife Rosalind.

Dating from an early period in Van Gogh’s career, the painting shows a local woman from the town of Nuenen in the south of the Netherlands, where the artist lived from December 1883 to November 1885.

Probably around 1905, when the Peasant Woman was lent to an exhibition at the Stedelijk Museum, Amsterdam, the decision was made to stick the canvas down on cardboard prior to framing.

At this date the Peasant Woman was evidently considered more “finished” than the Van Gogh self-portrait. The painting changed hands several times and in 1923 was acquired by Evelyn St. Croix Fleming, whose son, Ian, became the creator of James Bond.

It was not until 1951 that it came to Scotland, having entered the collection of Alexander and Rosalind Maitland.