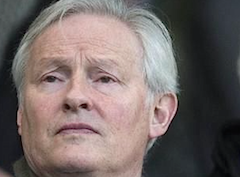 Celtic plc announced that its chairman Ian Bankier will retire from his role on January 1, 2023.

The company said it will make further announcements regarding a successor in due course.

Celtic principal shareholder Dermot Desmond said: “I would like to thank Ian sincerely for his contribution to Celtic across the past decade.

“Ian has provided great counsel and stability across a sustained period of growth and success for the club and I wish Ian and his family well for the future.

“We will ensure that we work very closely with Ian over the next few months to deliver a smooth and effective transition prior to announcing his successor.”

Bankier told the club website: “It has been an honour and a privilege to serve the club I will always love, as chairman, for more than ten years.

“Our aim was always to deliver success on and off the pitch and, above all, to give Celtic fans a club they could be proud of.

“During this time, I am grateful to have had the opportunity to work with so many fantastic people who have had Celtic in their hearts and worked so hard for our club.

“I know Dermot, Michael, and the rest of the board will continue to seek the very best for Celtic at all times and will seek to ensure that Celtic maintains its position as the biggest and best club in Scottish football, as well as progressing as a force in European football.

“I wish the board, our fantastic manager Ange, our players and staff and, of course, all our supporters much continued success as our great club continues to move forward.”