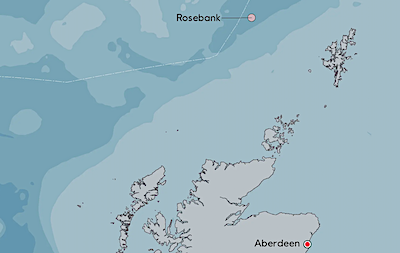 Norway’s Equinor has submitted plans to UK regulators for the development of Rosebank, a major oilfield west of Shetland which would start production in late 2026.

Equinor and Canada’s Suncor Energy each have a 40% interest in the Rosebank project, while Aberdeen-based Ithaca Energy has the remaining 20%.

Gas production is predicted to peak at 1.72 million cubic metres per day between 2029 and 2031, before steadily declining.

Environmental campaigners said Rosebank would be a “betrayal” of the UK’s climate goals — with Greenpeace vowing to fight the plan “every step” of the way.

“According to a socioeconomic study by Wood Mackenzie and Voar Energy, if sanctioned Rosebank is estimated to create £8.1bn of direct investment, of which £6.3bn is likely to be invested in UK-based businesses,” said Equinor.

“Over the lifetime of the project, Rosebank will generate a total of £24.1 billion of gross value add (GVA), comprised of direct, indirect and induced economic impacts.

“Rosebank, which is factored into the UK Government’s carbon budget, will have a significant impact on the UK production outlook.

“From first production in 2026 through to 2030 Rosebank could account for ~8% of the UK’s oil production.

“Rosebank, which will be tied to the UK gas infrastructure, is projected to produce an average of 21 MMSCF of natural gas every day, equivalent to the daily average use of Aberdeen city.”

Equinor said it acquired operatorship of Rosebank in 2019 and has since then been “working to optimise and mature a development solution for the field, originally discovered in 2004, together with partners Suncor and Ithaca Energy.”

It said Equinor and project partners will invest around £80 million up front to ensure it will be possible to power operations for the new oilfield with electricity.

“As a result, Rosebank could become one of the first oil and gas developments on the UK continental shelf to be powered by electricity, reducing the emissions and contributing to the UK government’s decarbonisation target of achieving a net-zero basin in the UK by 2050,” said Equinor.

“Rosebank will also have a major impact on local supply chains, industry and jobs according to the report.

“In excess of 1,600 jobs are estimated to be directly employed in the development of the project at the height of the construction phase in Q2 2025.

“Across the lifetime of the field, Rosebank will continue to support significant employment with an average of 450 UK-based full time direct, indirect and induced jobs.

“Equinor and the Rosebank project partners are working to progress the project to a final investment decision in 2023.

“Next steps will include obtaining consent for the project, which is subject to relevant regulatory approvals, including a public consultation on the environmental statement.”

Arne Gürtner, Equinor’s senior vice president of upstream in the UK and Ireland said: “Equinor is committed to Net Zero by 2050 and is ready to invest to bring energy security while also transitioning to lower-carbon energy sources over the coming years.

“Here in the UK we are building the world’s largest wind farm, Dogger Bank, and are planning some of the largest hydrogen and CCS projects in the world.

“That said, for the next few decades oil and gas will continue to play a vital role alongside these low carbon systems.

“Therefore, while we still need oil and gas, we aim to develop and operate projects such as Rosebank with the lowest possible carbon footprint while bringing the maximum value to society in the shape of UK investment, local jobs and energy security.”