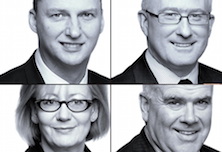 Glasgow-based Smart Metering Systems (SMS) said its revenue rose 25% to £32.3 million and its statutory profit before tax jumped 23% to £9.1 million in the half year ended June 30.

SMS is proposing a 25% increase in interim cash dividend to shareholders of 1.37p.

“The first six months have been marked by milestones for the company including reaching over a million utility meter and data assets managed on behalf of a growing customer base of energy suppliers in the industrial and commercial and domestic markets.

SMS is headquartered in Glasgow and it connects, owns and operates gas and electricity meters on behalf of major energy companies.

The company has a network of offices in Livingston, Cardiff, Cambridge, Bolton, Doncaster, Rugby, and Normanton.