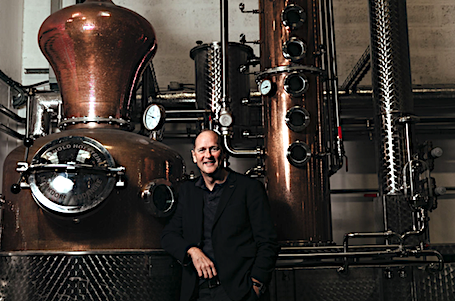 The appointment comes as BrewDog’s distilling arm, LoneWolf, revealed plans to expand its spirit range beyond its vodka and gin to encompass whisky and rum.

“He brings with him a wealth of experience from his time at Diageo, where he worked for 27 years and departed earlier this year as managing director of Diageo Futures,” said BrewDog.

“He was instrumental in driving growth of Diageo’s Premium Core spirits portfolio, which accounts for 50% of the company’s total net sales.

“During his time as Global Whisky Category Director, he established steady and sustained growth for Scotch Whisky and as Johnnie Walker Global Brand Director, he led the brand in becoming the most profitable international spirits brand in the world.

“David and his team also achieved success with a Cannes Gold Lion for the brand’s work with Robert Carlyle and ‘The man who walked around the world’ film.”

BrewDog cofounder James Watt commented: “David is as obsessed with quality and flavour as we are.

“His proven success in building an established spirits division makes him a force to be reckoned with in the industry; I’m thrilled to have him on board.

“I can’t wait to see where David takes LoneWolf — he shares our vision in standing as a marker and custodian of purist, truthful distillation methods, and his fresh, challenging thinking will not only take LoneWolf to new levels, but the entire category.”

Gates said: “The opportunity to shake up the spirits category with the industry’s biggest disruptor was just too good to pass up.

“What BrewDog has done for the beer industry is nothing short of awe-inspiring, you can’t help but be impressed with the energy, vibrancy and unapologetic attitude they’ve injected into the category.

“It’s that same creative flair and obsession for quality that I hope to bring to the spirits portfolio.”