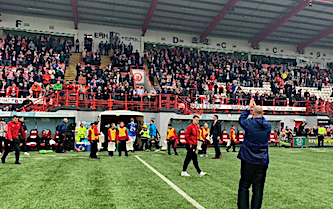 The latest annual Football Distress Report by corporate insolvency specialist Begbies Traynor has found that none of Scotland’s league football clubs are showing serious signals of financial distress, and that average attendances are also on the rise.

For the first time since the report began in April 2012, none of the 42 clubs that make up the first four divisions of Scottish football are currently showing signs of serious distress, down from a peak of four clubs in 2012 and 2013.

The report said Scottish Premiership saw a 1% rise in average attendances to just over 16,000 on average, the highest figures recorded since the survey began.

A 7% rise in average Scottish Championship gates to 3,090 was countered by falls in average gates in League 1 and League 2.

“We’re a long way from the days of Rangers’ 2012 failure when a clutch of clubs were teetering on the brink, with a bleak future and out of control finances,” said Ken Pattullo, who leads Begbies Traynor in Scotland.

“The huge waves caused by Rangers’ administration and subsequent journey through the tables have now settled down, and to some degree have contributed to benefiting and stabilising other clubs.

“We’re now seeing average gates across all the four divisions around 17% higher than at the end of the 2012 season, although these additional fans are predictably headed to the Premiership and Championship matches.

“To say we won’t ever see a club get into trouble again is impossible, but just five years ago we would have said another big failure was probably not unlikely, and the efforts of the clubs have put Scottish football into a far better place in a relatively short period.”

By contrast, there has been a sharp rise in football club distress in the English Leagues, with six clubs showing signs of distress, up from just one club 12 months ago.

Pattullo added: “The huge gulf in TV monies across the four English leagues are a big factor in these clubs’ distress, where relegation and promotion can be almost a matter of financial life and death for the club unless boards plan carefully.

“The lower TV revenues in Scotland, although unwelcome, do result in more predictable incomes and reduce the temptation to gamble heavily on personnel investments that threaten to cripple English clubs that miss the cut.

“The fact that distress is effectively nil in Scotland’s clubs is further evidence that, financially at least, the worst is behind for the sport.

“A few years ago, it was rare for months to go by without headlines of failing football clubs and administrations, but despite some tough times high‐profile failures are far more common now among high‐street retailers.”

A copy of the report can be downloaded at Begbies Traynor Red Flag Alert Football Distress Report.