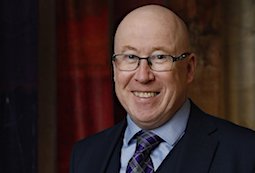 Queen Margaret University (QMU), Edinburgh, announced on Wednesday that Paul Grice, chief executive of the Scottish Parliament, will be appointed as the University’s new principal and vice-chancellor.

“With an outstanding record in governance and leadership at a national level, including high level experience in academic research policy and university finance, Sir Paul is a strong appointment to lead this ambitious university,” said QMU.

Grice will take over the role of principal and vice-chancellor from Professor Petra Wend, who has been at the helm at QMU since 2009.

Grice has held the position of clerk and chief executive of the Scottish Parliament since its inception in 1999, acting as its principal adviser on procedural and constitutional matters.

“Having worked in governmental organisations both in London and Scotland, he has built a reputation as an outstanding leader,” said QMU.

“He was involved in the constitutional group with responsibility for the referendum on establishing the Scottish Parliament and he went on to manage the Scotland Act which laid the foundation for the new constitutional framework.”

Grice also served as a member of the University Court of Stirling from 2006-2013 – chairing the University’s finance and resources committee from 2008-2012.

Frances Dow, chair of the Court of Queen Margaret University, said: “We are delighted to announce the appointment of Sir Paul Grice as principal of the University.

“He has a strong vision for QMU, building on the University’s successes so far. Importantly, he exhibits a real commitment to ensuring that students are front and centre of all developments, and to staff engagement.

“His philosophy on education aligns with the value that QMU places upon social justice, andon intellectual capital with both a theoretical and practical focus.

“These elements equip our graduates and staff to make a real difference to the world around them.

“Given his prominent roles in civil society so far in his career, it is abundantly clear that SirPaul will be a powerful voice for QMU externally and for the higher education sector as a whole.

“His approach will complement and build on the work of our outgoing principal, Professor Petra Wend, over her decade of service at QMU.”

Grice said: “I am absolutely delighted to be joining Queen Margaret University as principal and vice-chancellor.

“QMU is a great university and I feel privileged to have been given this wonderful opportunity.

“I look forward very much to getting to know the staff and students and to working with them to build on the university’s many achievements as we move into the new decade.”