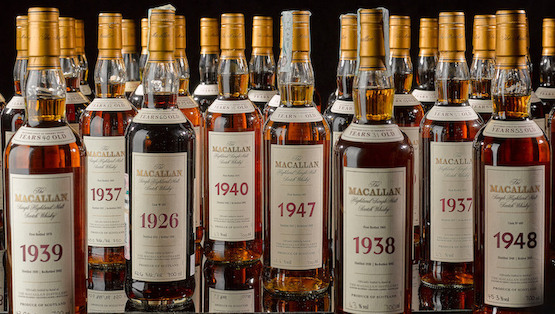 Sotheby’s has announced it will present “The Ultimate Whisky Collection” on September 27 in what it is calling “the most valuable collection of whisky ever to be sold at auction.”

The collection is expected to fetch about £4 million.

The sale will open for online bidding on September 27 and culminate in a live auction on October 24 at the Olympia event space in West Kensington, London.

Jonny Fowle, Sotheby’s Spirits Specialist, said: “The Ultimate Whisky Collection comprises what is undoubtedly the most comprehensive catalogue of whisky ever to be offered by a single owner in a single auction.

“Not only is it a joy to be able to present some of the most sought-after bottlings such as The Macallan 1926 60 years old and the Springbank 1919 50 year old, as well as such rarities as bottle number 1 of the Bowmore 54 year old (of which only 12 were released), above all it is extraordinary to see amongst these iconic bottlings so many expressions that have received the highest critic scores over the years, particularly the Samaroli bottlings of Bowmore and Laphroaig, the Macallan Red Ribbons and all of the Black Bowmores.

“Whilst collecting whisky can appeal to different people in different ways, it is clear that this collector is a true fan of the liquid within the bottles as well as the bottles themselves.

“Ultimately it is the enjoyment and appreciation of whisky that has made this collection what it is.”