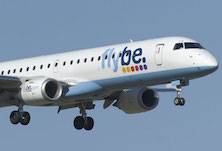 Regional airline Flybe — which connects all corners of the United Kingdom — said on Thursday it has entered administration after the UK Government walked away from a rescue package agreed in January.

The collapse comes amid a plunge in travel demand and makes the long-struggling airline one of the first big corporate casualties of the coronavirus outbreak.

The UK’s Press Association reported that dozens of flights have been cancelled at Scottish airports as a result of the airline’s collapse.

PA reported that AGS Airports, which owns and manages Aberdeen, Glasgow and Southampton airports, urged the UK Government to urgently review its commitment to the UK’s regions and to reform Air Passenger Duty.

At least 33 flights from Edinburgh Airport to destinations across the UK were cancelled, while Glasgow Airport has seen at least 12 flights to UK cities cancelled.

Flights have also been cancelled at Aberdeen Airport and from Highlands and Islands Airports hubs.

It said the 16 routes – from existing Loganair base airports at Aberdeen, Edinburgh, Glasgow, Inverness and Newcastle – will be launched progressively over the next three months.

“Flybe entered administration on 5 March 2020 and Alan Hudson, Joanne Robinson, Lucy Winterborne and Simon Edel of EY have been appointed as joint administrators,” said Flybe in a brief statement.

“All flights have been grounded and the UK business has ceased trading with immediate effect.”

Flybe, which has about 2,400 staff, was bought by Connect Airways, a consortium created by Stobart Group, Virgin Atlantic and investment adviser Cyrus Capital for a cut-price £2.2 million about a year ago.

Stobart Group said: “Flybe had shown promising signs of a turnaround despite the delay to receiving merger control clearance from the European Commission for its acquisition.

“However, despite the best efforts of all, not least the Flybe people, the impact of COVID-19 on Flybe’s trading means that the consortium can no longer commit to continued financial support.”

The Scottish Government said Flybe has around 300 employees at its bases in Edinburgh, Glasgow and Aberdeen and officials have spoken with Loganair, which is preparing to operate a number of Flybe’s former routes.

Transport Secretary Michael Matheson said: “We have this morning contacted administrators Ernst Young, based in Manchester, to offer support to affected staff through our initiative for responding to redundancy situations, Partnership Action for Continuing Employment.

“My officials have spoken with AGS Airports, Edinburgh Airport and Highlands and Islands Airports this morning to discuss how we can best help ensure connectivity is maintained and enhanced.”

The UK Government had agreed a rescue deal for the 41-year-old airline in January, saying it was important to maintain connections across the UK for its eight million passengers.

UK Transport Secretary Grant Shapps said: “We really tried to do everything we could back at the turn of the year.

“Unfortunately, with the situation that has developed with (coronavirus), an already weak company, I’m afraid, just hasn’t been able to survive.”

A spokesman for AGS Airports said: “The loss of Flybe is a devastating blow for the airline’s employees and the tens of thousands of passengers who relied on its routes.

“It unfortunately brings into stark focus the fragility of the UK’s domestic connectivity.

“Earlier this year the UK Government committed to levelling up all regions of the UK by conducting a review of regional connectivity.

“It’s vital this work is progressed as a matter of urgency and reforming Air Passenger Duty (APD) is part of that review.

“We are already speaking to other airlines about backfilling the routes operated by Flybe for which there is clear demand.

“In the meantime, the advice to passengers who were scheduled to travel with Flybe is not to travel to the airport and to visit the Civil Aviation Authority’s website for further advice at www.caa.co.uk/news.”

A spokesman for Edinburgh Airport said: “We are sorry that Flybe has gone into administration and ceased operations – our thoughts are with Flybe employees at this difficult time.

“We are assessing the impact on our operations and any passengers due to travel with Flybe should not come to the airport as those flights will not be operating.

“Connectivity across the islands of the UK is crucial for families, business and tourists and it is important that the UK Government works quickly and decisively to maintain the links across the UK.”

A spokesman for Highlands and Islands Airports said: “Our thoughts are with Flybe employees and customers at this time.

“Flybe flights from Inverness to both Belfast City Airport and Birmingham Airport are no longer operating.

“Anyone with a flight booked with Flybe should not travel to the airport and should contact the airline.

“Eastern Airways has confirmed that flights between Wick John O’Groats and Aberdeen will run as normal.

“Anyone travelling on this route should contact Eastern Airways if they require more information.”

Stobart and Virgin Atlantic said they were deeply disappointed with the outcome.

“Sadly, despite the efforts of all involved to turn the airline around, not least the people of Flybe, the impact of COVID-19 on Flybe’s trading means that the consortium can no longer commit to continued financial support,” they said.