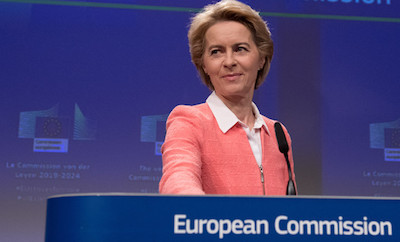 The European Commission on Wednesday put forward a plan to borrow on the markets and then distribute €750 billion in grants and loans to EU countries to help them recover from the coronavirus crisis.

In asking for the power to borrow €750 billion, European Commission president Ursula von der Leyen must now win support for the plan from some of the reluctant domestic governments among the EU’s 27 member states.

Under the plan, about €313 billion of the money would go to Italy and Spain.

“In total, this European Recovery Plan will put 1.85 trillion euros to help kick-start our economy and ensure Europe bounces forward,” the EU executive said in a document titled ‘Europe’s moment: Repair and prepare for the next generation.’

“The coronavirus has shaken Europe and the world to its core, testing healthcare and welfare systems, our societies and economies and our way of living and working together.

“To protect lives and livelihoods, repair the Single Market, as well as to build a lasting and prosperous recovery, the European Commission is proposing to harness the full potential of the EU budget.

“Next Generation EU of €750 billion as well as targeted reinforcements to the long-term EU budget for 2021-2027 will bring the total financial firepower of the EU budget to €1.85 trillion.”

Von der Leyen said: “The recovery plan turns the immense challenge we face into an opportunity, not only by supporting the recovery but also by investing in our future: the European Green Deal and digitalization will boost jobs and growth, the resilience of our societies and the health of our environment.

“This is Europe’s moment.

“Our willingness to act must live up to the challenges we are all facing.

“With Next Generation EU we are providing an ambitious answer.”

The European Commission added: “The Next Generation EU will raise money by temporarily lifting the own resources ceiling to 2.00% of EU Gross National Income, allowing the Commission to use its strong credit rating to borrow €750 billion on the financial markets.