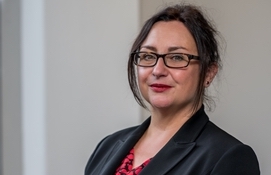 The recently-created South of Scotland Enterprise (SOSE) has announced that its permanent chief executive will be Jane Morrison-Ross, currently CEO of ScotlandIS, the organisation for the digital technologies industry in Scotland.

Morrison-Ross will take on the South of Scotland Enterprise role in February 2021.

Previously, she was CEO of Taigh Chearsabhagh in North Uist focusing on a five-year strategy for local economic regeneration.

“Jane is a highly experienced consulting industry executive, a former strategy and transformation specialist with 25 years’ experience working across the public and private sector,” said South of Scotland Enterprise.

“She has a strong track record of working in and with companies from SME to global enterprises, holding senior roles in industry, third sector and public sector organisations.

“The appointment has been made after a thorough 10-week recruitment process which was launched on 7 September 2020.

“SOSE is currently led by interim CEO Nick Halfhide, from NatureScot (previously Scottish Natural Heritage) who was appointed on 3 February until this permanent appointment was made.”

SOSE chair Russel Griggs said: “I am really delighted that we have found such an outstanding CEO in Jane to lead our team at SOSE into the future.

“We have embarked on such an incredible journey for the South of Scotland so I am sure that with Jane’s experience and enthusiasm we will continue to drive forward our vision and passion for our region.

“Jane adds to the incredible team that we have been steadily building and we have almost 70 members of staff now.

“We also have an exceptional board who have a broad range of knowledge and experience and have already showed since we started, their passion and commitment both to SOSE and the South of Scotland.

“I would like to thank Nick Halfhide for the great work he has done as interim CEO of SOSE to get us off the ground.

“His leadership and commitment to the role in these challenging times will allow us to continue to build upon the momentum that we have all created into the future.”

“Together we are here to do great things with our people of the south to deliver lasting change in the South of Scotland.”

Morrison-Ross said: “I am delighted to have the opportunity to work with Russel and to take up the reins from Nick.

“He and the team at SOSE have done an incredible job so far in hugely challenging circumstances.

“The SOSE region covers an area of Scotland rich in heritage but also with huge future potential.

“We will continue to be innovative, entrepreneurial, and focused on delivering for the individuals, communities, businesses and economy of the South of Scotland.”

Rural Economy Secretary Fergus Ewing said: “This is an important step for SOSE and I welcome Jane’s appointment as CEO.

“SOSE has a critical role in supporting jobs, investment and growth and the green recovery.

“Jane brings a wealth of skills and experience and I look forward to seeing SOSE continue to grow under her leadership, building on the work already done to deliver on our ambitions for the South of Scotland.

“I would also like to thank Nick Halfhide for his leadership of SOSE at such an important time in the agency’s development.

“Since its launch in April, SOSE has made a real impact across the region, whilst also having to adapt its business in response to the Covid-19 pandemic.

“Nick has played a key part in establishing the agency in its first year in operation and strengthening links with its partners.”