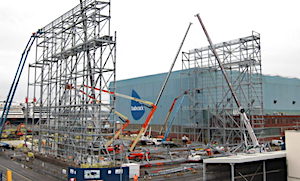 Aerospace and defence company Babcock has awarded a £31.5 million contract to Robertson Construction for the development of a new assembly hall at its Rosyth site.

Babcock also announced that it has placed an order for PEMA welding and production panel lines to support the automation of shipbuilding.

This is part of a £55 million investment programme currently underway on the site, on top of a further £100 million that has been invested over the last decade.

“The Assembly Hall will initially be used for the Type 31 general purpose frigate programme and provides a modern, future-ready facility designed to assemble two vessels side by side,” said Babcock.

“Free from weather disruption, the facility will enable productivity gains due to improved access and digital connectivity.”