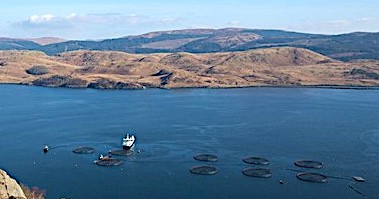 Faroese fish farming company Bakkafrost, owner of The Scottish Salmon Company, has announced “a significant sustainable plan to increase output of its premium salmon by more than 40% over the next five years.”

Bakkafrost said the growth is expected to be generated through a combination of “employing idle licence capacity and higher utilisation of existing licences by using large smolt.”

The company also announced “detailed measures and investments to improve the biological performance and cost structure” of its Scottish operations.

“The business, which has underperformed the industry in the past, will strengthen all parts of the value chain,” said Bakkafrost.

“A more robust framework for seawater risk mitigation combined with a shorter seawater cycle isexpected to become a game changer for biological performance and result in significant sustainable growth.

“Bakkafrost also plans to invest in processing facilities improving; efficiency, productivity and quality and with a focus to enhance capabilities supporting Bakkafrost’s overall brand strategy and to better meet the needs of the retail market.”

The Scottish Salmon Company has its HQ in Edinburgh but most of its 650 staff are employed in remote and rural communities throughout Scotland.

The company said that the implementation of the investment plan “will be transformational for its Scottish operations and aims to become the most sustainable and profitable in the Scotland, where it has underperformed in the past.”

Bakkafrost said it is collaborating with Scottish authorities in progressing its investment plan in Scotland to ensure sustainable growth.

“Due to lead times in construction and the long production cycle of salmon, expected profit and loss improvements are back end loaded in the plan,” the firm added.

“Bakkafrost plans to continue the development of its efficient and well invested value chain in the Faroes, aimed at maintaining its strong biological track records and to facilitate planned growth during the next five years and beyond.

“The investment plan is expected to be financed through a combination of operational cash flow and available funding.

“The company is committed to maintaining its sustainable dividend practice.”

“As a result, the industry is committing significant resources to the development of alternative farming methods on and offshore,” Bakkafrost said.

“This indicates a disciplined introduction of capacity from such projects.

“Bakkafrost’s value chain is well prepared to bolt on such projects once its conventional capacity is depleted and proven technology becomes available.

“With limited capacity expected to be to be introduced from conventional and alternative farming methods during the next five years, Bakkafrost expects the tight market for its premium salmon products to remain.”