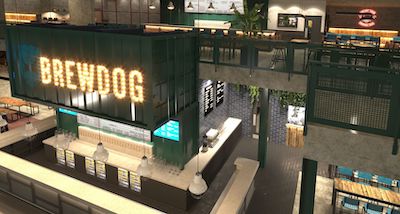 Scottish craft brewer BrewDog announced it will create a 26,500 sq ft global flagship venue as the centre piece of the rejuvenated Waterloo Station in London.

The company said BrewDog Waterloo will be the biggest BrewDog location in the world, encompassing two floors of craft beer, spirits, food and entertainment.

BrewDog’s James Watt said: “London’s beer scene is the rival of any in the world, and our supersized plans for BrewDog Waterloo, at the epicentre of the UK’s busiest railway station, are a testament to that; this is quite simply one of the biggest things we have ever announced.

“We can’t wait for Londoners and visitors to the city alike to see our new flagship for the capital.

“Beer, bowling, cocktails and coffee; BrewDog Waterloo will be a destination for anyone seeking out great food, great drinks and an amazing time.”