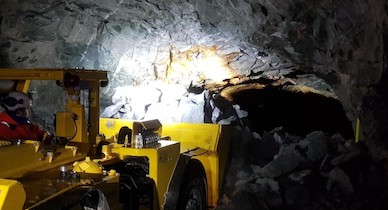 Scotgold Resources Limited, the Australia-based gold exploration firm focused on Scotland, said on Tuesday that Nat Le Roux is stepping down as non-executive chairman, a position he has held since March 2015.

Le Roux will remain on the board as non-executive director and major shareholder of the first commercial gold miner in Scotland.

Hetherington is an experienced director, having held the positions of COO and CEO of FTSE 250 trading platform IG Group, and the role of CEO at Schroders Personal Wealth.

Scotgold also gave an update on operations at its Cononish gold mine near Tyndrum which it said is “continuing in its ramp up stage following its first gold pour and production in November 2020.”

Le Roux said: “Seven years ago, I recapitalised Scotgold and joined the board as chair.

“My aim from the beginning was to see Scotland’s first commercial gold mine in production.

“That objective has now been achieved, thanks to the dedication and hard work of our executive team.

“Therefore, I believe this is the right moment for me to stand down as chair.

“Peter Hetherington and I have worked together for many years, and as Scotgold’s major shareholder, I am wholly confident that he will prove an effective successor.“

Hetherington said: “I have been a non-executive director of Scotgold for over three years.

“During that period the company has transitioned from being almost dormant into the exciting, bustling enterprise it is today.

“This is a testament to the vision and finances that Nat brought to the company as well as the hard work of all the employees past and present.

“The next phase for Scotgold is the continued professionalisation and commitment to sustainability of every aspect of the company’s operations.

“I look forward to working with our CEO Phil Day, and the board to facilitate this change and on our overarching growth strategy for 2022 and beyond.

“There is still much to be done but the task, now that we are repeatedly cash flow positive on a monthly basis, is much simpler than it was when Nat became chair.

“Our priorities remain: the safe, environmentally friendly, and profitable operation of the Cononish gold mine and process plant near Tyndrum, whilst we prospect and develop further mines within our extensive licenced area.

“We fully intend to become a multi-asset gold producer, significant employer and contributor to the local economy.“

The firm said: “The Cononish gold mine in Tyndrum, Scotland is continuing in its ramp up stage following its first gold pour and production in November 2020.

“With a new leadership team appointed in April 2021, Q2/Q3 2021 has been focussed on de-bottlenecking and the continuous improvement in the availability of the process plant through maintenance practises and planning; including holding the additional spares and applying more optimal prediction of materials handling wear rates.

“During October, the first Ball Mill reline was planned and completed.

“This took one week to complete.

“Around 64 tonnes of concentrate were produced during October.

“With the Mill reline now completed, Scotgold is very well positioned to continue ramping up its gold production output towards design throughput for phase one, being 973oz per month until the end of 2021.

“The company therefore expects production for the remainder of the calendar year to be within the guidance range of between 1,300oz and 1,950oz of gold production for November and December combined.

“In addition, gravity gold production is continuing on track for delivery to the refiners in December.

“Scotgold’s board and leadership team are preparing the operational, financial budget and strategic plan for 2022 which will incorporate initiatives to continue to increase the production rate of the Cononish mine and process facility gold output.

“Such initiatives will include mapping a new area to commence cut and fill stope mining, similar to the successful implementation in 2021, installation of a tailing’s thickener prior to the tailings filter to achieve higher throughputs and continuing with work for the feasibility of installing an ore sorter between the crushing and milling stages.

“The board and management of Scotgold look forward to updating the market on the 2022 strategic plans early in the new year before the AGM and then quarterly thereafter.”