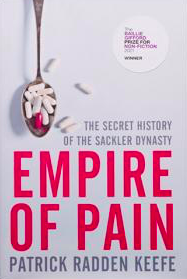 Patrick Keefe has been named the winner of the £50,000 Baillie Gifford Prize for Non-Fiction 2021 for Empire of Pain: The Secret History of the Sackler Dynasty published by Picador.

“Empire of Pain describes in vivid detail the calculated acts of deception from one of the most prominent philanthropic families of the 20th & 21st centuries,” said Baillie Gifford, the Edinburgh, Scotland-based asset management giant.

“Formerly known for their large donations to global arts institutions, Keefe reveals how the Sackler family’s wealth is rooted in corruption, greed, ruthless ambition and the devastating opioid crisis that swept the United States.

“Through accessing thousands of private documents and conducting over 200 interviews, he unveils a gripping story of internal rivalry, systematic deceit and coercive power.”

Patrick Keefe is a writer for the New Yorker magazine and the author of Say Nothing: A True Story of Murder and Memory in Northern Ireland, as well as two previous critically-acclaimed books, The Snakehead, and Chatter.

He grew up in Boston and now lives in New York He is also the creator and host of the eight-part podcast Wind of Change which is set to be adapted into a TV series for Hulu.

Andrew Holgate, chair of judges says: “We were completely bowled over as a group of judges by Patrick Radden Keefe’s Empire of Pain.

“By its moral rigour, its controlled fury, its exhaustive research, the skillful writing, the bravery it took to write it.

“Above all, though, by its sheer propulsive narrative energy.

“This is an exceptionally important story Keefe has mined in Empire of Pain, but what impressed us most was the skill with which he has told his jaw-dropping tale, and how immersive and unputdownable he has made the telling.

“This is journalism as outstanding literature, and what we have here is a future classic.”

Mark Urquhart, senior partner at Baillie Gifford, said: “Over the past 18 months the rich and varied world of non-fiction has helped many of us escape and be transported to worlds and experiences far from our own.

“This is a testament to the quality and breadth of non-fiction writing being published in the UK.

“Congratulations to all the shortlisted authors, and especially to Patrick Keefe on winning this year’s accolade”