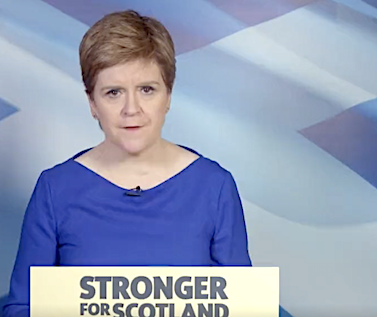 Scotland’s First Minister Nicola Sturgeon said on Monday she will “initiate the process necessary” to hold an independence referendum by the end of 2023.

Addressing the Scottish National Party conference, Sturgeon said: “I defy anyone to look at the broken, corrupt, self-serving Westminster system that we are currently part of and conclude that it provides a secure basis for the future of Scotland.

“Next year, Covid permitting, as we emerge from winter into spring, the campaign to persuade a majority of people in Scotland that our future will be more secure as an independent nation will resume in earnest.

“In the course of next year, I will initiate the process necessary to enable a referendum before the end of 2023.

“And just as importantly, our party will set out afresh the positive case for independence.

“We will outline the opportunities and advantages that independence will open up.

“The opportunity to repair the damage of Covid – including the fiscal challenges it has created for all countries – in a way that aligns with our values and priorities as a nation.

“To use our financial and human resources to tackle poverty and give young people a better life.

“To use our vast natural resources to help safeguard our planet and secure green jobs for the future.

“And to rejoin the European family of nations, so that we can expand not narrow our horizons, and grow our trade across the whole of the continent.

“We will also be candid about the challenges the transition to independence will present, and set out clearly how we can and will overcome them.

“And then, friends, we will ask the people to decide.

“Now, what the UK government’s response to this will be is not up to me, but my message to Prime Minister is this:

“In the last 60 years or so, more than 100 countries have become independent.

“Very few – if any of them – have the resources and advantages of Scotland.

“The fact is independence is the normal state of affairs for countries the world over.

“The self government it encapsulates is the building block for the progressive internationalism that we stand for.

“And for countries of Scotland’s size, the simple truth is this: independence works.

“Our neighbours across north-west Europe are all wealthier than the UK, more equal than the UK and have lower levels of poverty than the UK.

“With all the resources and talents we have available to us, I simply do not believe that Scotland can’t match – perhaps even surpass – the success of Denmark, Norway, Ireland, Austria and the many other prosperous independent countries that are all around us.

“I do believe, more than ever in this new world we are facing, that the best way to secure a better Scotland is to take our future into our own hands.

“An independent Scotland will be an outward looking, welcoming nation.

“A country that celebrates diversity and works with others to shape a better world.

“We will be a partner with our closest friends in the rest of the UK, and an EU member committed to values of equality, democracy and human dignity.

“For people today and for generations to come that is a future worth standing up for.

“It is a future worth campaigning for.

“And it is a future worth winning.

“So let us put our shoulders to the wheel of winning and building that better Scotland.”