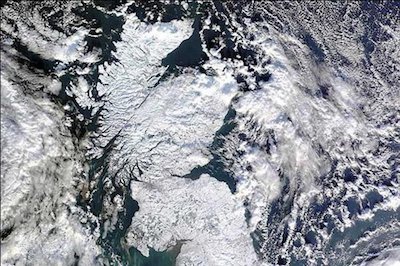 NATS — formerly called National Air Traffic Services — announced it has implemented the “biggest ever geographical airspace change in the UK” by removing long-established air routes over Scotland and allowing aircraft to choose their most direct flight path.

NATS said that with up to 2,000 flights using this part of UK airspace every day, involving 80% of transatlantic traffic, the move will save CO2 every year equivalent to the power used by 3,500 family homes — about 12,000 tonnes CO2/year.

The new Free Route Airspace (FRA) covers approximately 150,000nm2 of airspace over the North Sea, Scotland, North Atlantic, Northern Ireland and a small portion of northern England – a footprint over twice the size of the UK.

NATS said it has been developing the Free Route Airspace (FRA) concept in UK airspace for over five years.

It allows airlines the freedom to take the optimal route considering variables such as weather and wind speed — helping to reduce cost, fuel burn, flight time and CO2 emissions.

“While the greatest CO₂ savings will be made through new aircraft and engine technology, these are still many years away, and even sustainable fuels are unlikely to be available on a significant scale this decade.

“In the short term, managing our airspace more effectively, and flying more efficiently, can play a crucial role – and that’s where NATS’ introduction of airspace modernisation comes in.

“Today’s introduction of Free Route Airspace over Scotland marks a leap forward for airspace modernisation in the UK and an important step towards achieving net-zero by 2050.”

NATS Head of Airspace Development Lee Boulton said: “The routes traditionally used were decided many decades ago, when navigational techniques and aircraft technology were very different.

“At the time it made sense to think of routes much like fixed motorways in the sky — to get from A to B you would travel along one corridor until you got to a junction that let you change direction towards your destination, which is often not the most direct route.

“The removal of all upper air routes in approximately one third of UK airspace allows airlines to fly the most fuel efficient and timely routes.

“It will support the industry’s recovery from Covid-19 by improving efficiency, reducing flight times, and reducing emissions equivalent to that of 3,500 homes every year.

“Despite the challenges caused by the pandemic, NATS is continuing with plans to modernise airspace over the coming years.”