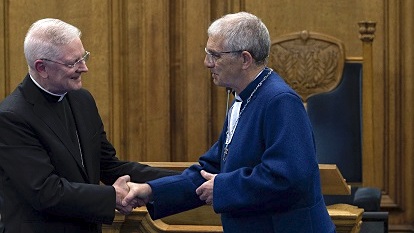 The General Assembly of the Church of Scotland on Monday overwhelmingly approved a Declaration of Friendship with the Catholic Church in Scotland.

The Moderator put the Declaration to a vote and it passed by 421 votes to 4.

In the Declaration, to be named the Saint Margaret Declaration — subject to approval by the Catholic Bishops Conference — the two Churches “recognise each other as brothers and sisters in Christ, and … wish to express our friendship and respect for one another as fellow Christians, citizens and partners in announcing the kingdom of God in our land.”

They recognised the “hurt and harm” done by past disagreements and acknowledge that “some questions still divide us” but “reaffirm that what we hold in common is often greater than what divides us” and “commit ourselves to continuing our pilgrimage towards greater unity, as we believe that it is the Lord’s will that we be one.”

Rev Sandy Horsburgh, convener of the Ecumenical Relations Committee, said: “Friendship is a very deep relationship, a relationship of conscious and deliberate choice, in which individuality is respected and there is room for disagreement, but a relationship in which we stand alongside one another, support one another, rejoice together and weep together, pray for and with each other, and do things together.

“We recognise our need for repentance and forgiveness for the hurts and harms we have caused one another.

“In making this Declaration of Friendship, we are decisively and deliberately putting these things behind us.

“We are declaring the truth that we share in the one faith, and that our shared faith is rooted in the faith of the Apostles, as revealed in Scripture and developed and deepened over many centuries.

“We are declaring a friendship which already exists, which has existed for a long time, and we want everyone to know about it and understand it.

Archbishop Leo Cushley, the Roman Catholic Archbishop of St Andrews and Edinburgh, told the Assembly that the Declaration meant that the two churches “stand shoulder to shoulder before an unbelieving world.”

He added: “By acknowledging all the good we hold in common, we can walk and pray together as friends, deepen our affective unity and be a more authentic Christian witness in the land.”

The title Saint Margaret Declaration was suggested by the Rev Dr Grant Barclay, who suggested a name would give the declaration greater prominence.

He said that St Margaret, the 11th century Queen of Scotland, was “a figure of unity in political and church life in our nation” as well as being closely associated with Scotland’s newest city, Dunfermline.