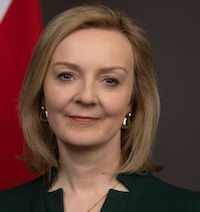 Liz Truss will become the next prime minister of the UK after winning a leadership race for the UK’s Conservative party on Monday.

Truss vowed to press ahead with promises of tax cuts and to deal with a growing energy crisis.

“I will deliver a bold plan to cut taxes and grow our economy,” Truss said.

“I will deliver on the energy crisis, dealing with people’s energy bills, but also dealing with the long-term issues we have on energy supply.”

Scotland’s First Minister Nicola Sturgeon: “Congratulations to Liz Truss. Our political differences are deep, but I will seek to build a good working relationship with her as I did with last 3 PMs.

Frédérique Carrier, Head of Investment Strategy at RBC Wealth Management: “PM Truss will likely be less keen to balance the country’s books than former Chancellor Sunak would have been, and interest rates are likely to increase further during her premiership.

“PM Truss seems less fiscally conservative than former chancellor Sunak. She now seems to be in favour of supporting the economy other than through tax cuts.

“This ultimately means higher borrowing, and in turn it means the Bank of England could be forced to increase rates further than otherwise would have been the case.

“For now, we expect the Bank of England to deliver two 50bps rate hikes at its meetings on September 15th and November 3rd as economic data has not deteriorated sufficiently yet to prevent it from being hawkish.

“We still expect the UK economy to weaken materially going forward, but we don’t expect the labour market to weaken enough to prompt a return to a slower pace of tightening in November.

“A larger 75bps rise is possible at the November meeting but will likely depend on whether inflation surprises on the upside and the fiscal plans of the new UK government.

“PM truss is less likely to repair the trading relationship between the UK and the EU than PM Sunak might have been. She broke off talks with the EU regarding the Northern Ireland protocol earlier this year, preferring to take unilateral action.

“Such a hard stance on this issue could ultimately lead to a trade war with a region which remains the UK’s main export market. This would be problematic given the already weaker UK economy.”

Walid Koudmani, chief market analyst at financial brokerage XTB: “We saw softness in the UK pound in the immediate reaction to Liz Truss being named new Conservative leader and as a result, UK Prime Minister.

“The GBP traded at around $1.15 against the US dollar and earlier this morning reached its lowest levels in more than two years.

“Of course with Truss leading Sunak in the polls since the start of the leadership campaign, the fact she has now formally won the race to become the UK’s new Prime Minister is not any surprise to the markets.

“Yet it’s pretty clear there is a degree of nervousness amongst UK investors to her premiership.

“We already know she wants to initiate £30bn worth of tax cuts and borrow more to plug the hole in funds.

“Moreover, it’s looking more likely that as new PM, she will freeze energy bills to help contain the spiralling cost of living crisis. This would help to tame inflation but it will come at significant cost to government finances which will likely be paid for by more borrowing.

“This has led to inevitable concerns about the state of the UK economy and its public finances. UK debt now stands at 96% of GDP which is the highest since the 1960’s.

“To make matters worse, with interest rates rising globally to slow rapid inflation, servicing debt has become more and more expensive. So there is certainly a degree of uncertainty over the economic plan under PM Liz Truss. This is why investors are selling out of the GBP aggressively and why UK bond yields are racing higher.

“Of course, now that Truss has won the premiership, we might see a different Truss to the one campaigning to become Conservative leader. This might mean her policies could be toned down somewhat and if we start to see moves such as this, it will likely make investors more comfortable.

“Indeed, we’ve already started to see her unsettling comments about changing the Bank of England’s mandate be rolled back, which cannot be underestimated.

“The independent Bank of England is a beacon to the stability of the UK for foreign investors.

“If the role of the BoE is amended or their ability to set interest rates independently of the government is changed, it would dramatically alter how international markets view the UK’s financial landscape and not in a good way.

“Comments from Truss and her supporters over the weekend have diluted her ambitions on the BoE’s role it seems.”

James Sproule, Chief Economist UK at Handelsbanken: “The new Prime Minister, Liz Truss, is very different from her predecessor, being more ideologically wedded to free markets and small government than any premiere since Margaret Thatcher.

“That said, one area of agreement between Johnson and Truss is over the UK’s support for the Ukraine, so expect no change there. Truss made her name as the trade minister, she voted to Remain, but has since been enthusiastic in seeking post Brexit opportunities and signing a series of free trade agreements around the world.

“Importantly, Truss firmly believes that tax cuts will have a stimulative effect on the economy. We expect the new PM’s announcements to come in three waves: immediate, in the next few days; at an emergency budget, sometime in the next month; and ideas set out in the next electoral manifesto, things that she would like to put in place were she to win a fresh mandate in 2024 …

“The broad backdrop of the cost of living crisis has to be addressed immediately. Rocketing energy prices, steep tax rises, and rising interest and inflation rates, have all combined to send the GfK consumer confidence down to 47 year record low levels.

“Over the course of the leadership campaign, Truss has made pledges to reverse tax rises which were scheduled to take the tax burden to levels last experienced in the late 1940’s: chiefly she is looking to reverse the recently introduced 1.25 percent increase in National Insurance and forego the planed hike of Corporation tax to 25 percent.

“These two moves will cost the exchequer of £25 billion. Issues such as the green energy levy will also be looked at to see if there were other ways to meet environmental targets. There has also been discussion about a review of business rates, inheritance tax and taxation of the self-employed.

“These discussions have been notably short on details. Longer term in a future Parliament, Truss wants to set out a long-term plan for the economy, including setting out a long-term plan to repay Covid related debt. This is also when issues such as reviewing the Bank of England’s 25 year old mandate would be considered, although any change to operational independence is not being contemplated.”

Alastair George, Chief Investment Strategist at Edison Group: “Investors have yawned as the fiscal levers which Liz Truss has under her control are dwarfed by the challenges presented by the global inflation surge and the geopolitically induced energy crisis.

“Large, stimulative tax cuts at this stage would seem to run counter to efforts by the Bank of England to slow the UK economy and head off higher inflation, while resolving the energy crisis ultimately requires a resolution to the Russia/Ukraine conflict.

“We see little change to the outlook for UK equities which are by no means expensive but will continue to suffer the headwinds of slowing UK growth and higher interest rates over coming quarters.”

“The measures proposed in her leadership campaign are clearly inadequate, and we expect the PM to quickly pivot towards making large direct payments to households …

“The package of personal and corporate tax cuts would add just 0.1ppt to the level of potential GDP by the end of the parliament. Moreover, there’s been no detail to back promises of a radical approach to supporting growth and reforms to the BoE’s mandate …

“The PM’s combative attitude to the Northern Ireland Protocol increases the risk of a trade war with the EU. But the scale of cost-of-living pressures may mean she’s more willing to look for compromises than her stance as foreign secretary suggested.”

British Chambers of Commerce chair Sarah Howard: “She must now take immediate steps to support the economy. The last few months have been difficult for everyone, time is running out and urgent action is needed to deal with the costs’ crisis.

“We believe the country has already entered a recession and that inflation will hit at least 14% in the months ahead.

“Like households, firms have been telling us of unsustainable rises in their energy bills and how difficult it is to find new fixed term contracts to buffer against further price hikes.

“Unless the new Prime Minister addresses these problems head-on then the economy will drift further into dangerous waters and the outlook for both businesses and consumers will be bleak indeed.

“The BCC set out a five-point action plan to support businesses at the end of August and sent it to the Treasury and Liz Truss’s team.  It is now imperative that we see movement on our proposals.

“The plan is not just about ensuring support for businesses. It is also about protecting jobs, securing livelihoods, and creating a vibrant and prosperous society.”