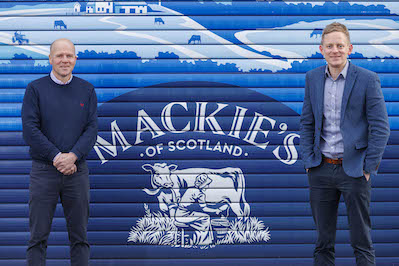 Premium ice cream brand Mackie’s of Scotland has appointed a new managing director as it plans continued growth and development throughout the UK and abroad.

Stuart Common, 36, has secured the MD role after working at the Aberdeenshire family business for more than 16 years, latterly as its sales and marketing director.

Common’s appointment commences with immediate effect as former managing director Mac Mackie, 56, takes on a new position as executive chairman to have more time to take a strategic overview of the business and its development.

Mackie’s is the largest independently owned ice cream manufacturer in the UK.

Mac Mackie, who took on the MD role in 1998 to succeed his father and Mackie’s founder, Maitland Mackie, said: “Stuart has already become an integral part of our senior management team over the last decade and I’m confident that he’s the right person to step into our MD role.

“He embodies the culture that underpins everything we do, not to mention his close ties with our largest supermarket, wholesale and foodservice trade accounts, many of which he personally established and built up.

“We’re putting in place the foundations for the business to continue to flourish. Stuart is young enough to thrive in the role for many years to come and will drive our agenda of growth, development and change.”

Mackie’s remains a family business, with Mac’s sister Kirstin McNutt continuing in her role as Head of NPD (new product development) and the recent arrival of Mac’s nephew Angus Hayhow marking the first of the fifth generation to join the business.

The moves follow a period of sustained growth for Mackie’s, which has climbed to become the sixth biggest food and drink brand in Scotland while reaching record market share south of the border.

Mackie’s has also completed its largest ever internal investment programme with the installations of new ice cream filling capability and of one of Europe’s most efficient low-carbon refrigeration systems, establishing the farm-base as an ultra-efficient and sustainable operation that produces twice as much energy as it uses.

Edinburgh born and raised, Common started working at Mackie’s in 2006 on a year-long placement during his studies at Robert Gordon University business school. While there, he began to forge a career in sales before moving to Aberdeen Journals in 2011.

Common said: “Mackie’s is a company that refuses to stand still, which is a huge source of motivation for me and my colleagues.

“I’ve enjoyed being part of a management team with such clear commitment to change, growth and internal investment to build and prepare for the future.

“The shared vision of continued growth and diversification is testament to the leadership that we have had in place since our inception as an ice cream business in 1986 and chocolate maker since 2016.

“It is a huge privilege to be entrusted with this role at what is one of Scotland – and the UK’s – best known family businesses.

“Mac has left a tremendous legacy, his hard work and determination has helped bring Mackie’s to the fore, and I am excited to develop the brand further and, with his continued guidance, continue pushing Mackie’s forward as one of Scotland’s best food companies, expanding sales around the world and furthering the sustainability goals at the heart of the company.”