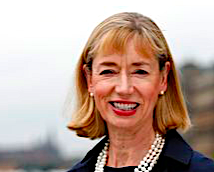 The Scottish Government has formally launched the search for its next permanent secretary and is offering a salary of up between £162,500 and £180,000 a year for the right candidate to fill what it describes as a 37 hours-a-week job.

Outgoing permanent secretary, the controversial Leslie Evans, said in a tweet: “As my term as Perm Sec comes to an end recruitment begins for my successor.

The job advert reads: “As Permanent Secretary, you will provide leadership and direction for the Scottish Government in support of Ministers.

“You will play a key leadership role across Scottish public services, including communicating the Scottish Government’s priorities and values within and beyond Scotland.

“You will lead the Scottish Government’s relationship with the civil service in Whitehall and the other devolved governments, in an evolving constitutional context.

“We are looking for a leader who can build trusted relationships with Ministers and a multiplicity of partners.

“If you have successfully led change in a complex environment, have proven strategic and financial abilities, and believe you would be a highly effective operator in this political environment, then we very much hope you will consider this role.”

Evans was appointed permanent secretary on July 1, 2015, the first woman to hold the role in Scotland, and proved to be a controversial figure.

Evans worked in local government in England and Scotland for 20 years before joining the civil service in 2000. She was born in Northern Ireland and has lived in Scotland since 1985.

Evans studied music at the University of Liverpool. 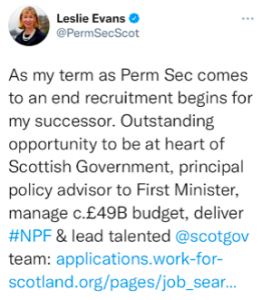