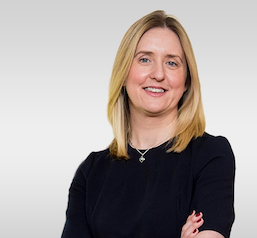 ScotRail has announced the appointment of its new chief operating officer from April 1, 2022, when the train operator becomes a public body.

Joanne Maguire, currently Vice Principal – Resources at the University of the West of Scotland, will take up the role on day one of the new public body.

Maguire, 42, will take over from current chief operating officer Ian McConnell when Abellio hands over the franchise to Scottish Rail Holdings, the public body that will own and oversee ScotRail Trains from April 1.

Prior to her current position, Maguire was executive director for HR at the university and has held senior leadership roles at City of Glasgow College, as well as in the manufacturing and retail sectors.

Train drivers’ union Aslef said the appointment of a chief operating officer without any experience within the railway sector was a “huge error”.

Gibb will also chair the board of ScotRail Trains.

“Joanne brings a wealth of leadership experience to this role, which will be vital as we transition to the new public body.

“From the outset it was clear Joanne has the skills, determination, and energy needed to lead ScotRail Trains as it seeks to recover from the pandemic and give customers the safe and reliable service they deserve.

“I am really excited to welcome Joanne to the team.”

Maguire said: “I am excited to take up my role at ScotRail Trains.

“Throughout the pandemic, the railway has played a vital role in keeping key workers moving, connecting communities, and supporting the economy during challenging times.

“I know from my own experience as a passenger how passionate railway staff are about their role in keeping Scotland moving safely while delivering good customer service, and I cannot wait to join the team and engage with colleagues across the organisation.

“The transition to the new public body will be the next chapter in the evolution of Scotland’s Railway, and I am delighted to have the opportunity to play a leading role in the organisation during what will no doubt be an exciting time.”

Gibb said: “ScotRail Trains will have an outstanding leader in Joanne.

“At this moment of significant change, her leadership skills will be essential in making the new venture a success for our customers and staff.

“I am really looking forward to working closely with Joanne over the coming years in my role as chair of the ScotRail Trains board.”

Aslef  Scotland organiser Kevin Lindsay said: “Scotland has a chance to build its new publicly operated railway properly, yet ScotRail and the Scottish government have made a huge error before the first train has left the station.

“We need to be getting Scotland back on track with a world-class service that’s affordable and helps meet our climate targets.

“Yet days after announcing fare hikes we learn that this crucial appointment has been made to someone with no experience of running the railways.

“The transport minister must meet with Aslef and other rail unions immediately if our new service is to be prevented from going off the rails.”