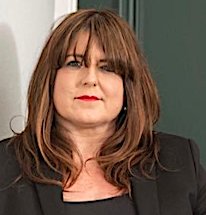 The Scottish Government announced that Louise Macdonald has been appointed “interim Director-General (DG) Economy” to lead delivery of the “National Strategy for Economic Transformation.”

Macdonald, currently National Director of the Institute of Directors (IoD) Scotland, replaces Elinor Mitchell, who is “taking time away due to personal health reasons.”

This is an interim post for up to 11 months, starting May 2.

Macdonald, a journalist, was formerly chief executive of Young Scot.

The Scottish Government said: “Substantive recruitment for the DG Economy role will be taken forward later in the year with a successful permanent candidate announced in due course.

“Both internal and external markets were tested for this role late last year.

“This replacement interim appointment provides additional leadership to drive delivery of economic transformation in the critical period ahead and was approved by the Civil Service Commission.”

Permanent Secretary John Paul Marks said: “I am delighted to welcome Louise Macdonald to my executive team and to the Scottish Government.

“Louise has an impressive commitment to growth, reform and inclusion and is a champion for transformation in Scotland’s economy.

“We want to build deep partnerships across private, voluntary and public sectors and Louise brings new leadership and creative energy at this important time for Scotland as we strive to build coalitions and embed recovery, whilst grappling with complex global challenges.

“Louise’s leadership skills, commitment to good governance and partnership working, matched with her diverse background and ambition for Scotland will be fresh, engaging and valuable to our teams in this important next phase for Scotland’s economy.

“I am grateful to the IoD and to the Civil Service Commission for their support.

“We will repeat last year’s substantive open competition later in the year and meantime press ahead with Louise leading this important work to transform our economy.”

Macdonald said: “It has been a privilege to work with the fantastic IoD Scotland members, as well as the IoD team, with so much insight shared and learning I’ll take with me into this post with the Scottish Government.

“The success of the National Strategy for Economic Transformation is something which matters to every business, every cross-sector organisation and every community across Scotland and I am looking forward to playing my part in that.”