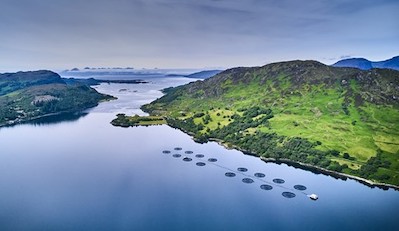 The Scottish Salmon Company (SSC) has announced it will rename its operations in Scotland as Bakkafrost Scotland.

The Scottish Salmon Company, which currently employs 600 people, was acquired by Faroese fish farming company Bakkafrost in 2019 in a deal that valued the Edinburgh-based Scottish business at £517 million.

Bakkafrost intends to invest £711 million between 2022 and 2026 to increase its output of premium salmon by more than 40%.

“The corporate focus for the past two years has been to align the businesses and develop its core capabilities in Scotland,” said Bakkafrost.

“The renaming of the Scottish operations will ensure that the group operates as “One Company’, with two regions of production.

“The ambition is to become Scotland’s leading most sustainable salmon producer and our sustainability strategy will totally transform the business, it’s impact on the environment and deliver leading standards of fish health and welfare.

“As an integral part of the five-year investment and sustainability plan, the Bakkafrost Group has committed to an investment programme of £711 million to increase our output of premium salmon by more than 40%.

“A substantial proportion of this investment will be made in Scotland.

“Sustainable growth of Bakkafrost Scotland is a priority. This is being realised by introducing industry leading ‘recirculating aquaculture system’ (RAS) freshwater infrastructure for larger smolt production.

“Applecross is home to the first Bakkafrost Scotland RAS facility, an innovative post smolt facility, which will produce 500g smolt, leading on fish health and welfare, and low environment impact, with sustainable production.

“RAS technology will eventually be used across all freshwater production, transforming Bakkafrost Scotland’s operations. Further details on the second facility will be announced over the coming months.

“The announcement comes shortly after another investment milestone for the company with the opening of its new Scotland headquarters in Drumsheugh Gardens, Edinburgh.”

Bakkafrost CEO Regin Jacobsen said: “When we acquired The Scottish Salmon Company, we saw the exceptional value of Scottish provenance and an opportunity to create the leading and most sustainable salmon producer in Scotland.

“The next step in realising this potential is the renaming of our Scottish operations to Bakkafrost Scotland.

“This represents an important milestone in our ‘One Company’ strategic focus, as we continue to build on our strengths and best practices across the group to fully benefit from the collective knowledge and competencies from our passionate and talented employees.

“The renaming also signals that we are fully commited to Scotland and look forward to realising our investment plan that will create jobs and value in our local communities.

“Scotland is an integral part of our future plans for business growth.”