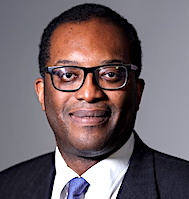 “We get it, and we have listened,” Kwarteng said as he announced his humiliating U-turn on Twitter on Monday.

However, the proposal became “a distraction from our overriding mission to tackle the challenges facing our country,” admitted Kwarteng in his statement.

The mini-budget and its projected costs caused mayhem in the financial markets.

Victoria Scholar, head of investment, Interactive Investor, said: “The UK government has staged a U-turn on its plans to scrap the 45p rate of income tax.

“Chancellor Kwasi Kwarteng has confirmed the abolition of the top rate of tax paid by those earnings over £150,000 will no longer be carried out.

“It comes after a growing number of Conservative MPs expressed concerns over the tax plans with fears from the Truss administration that the proposal would fail to get sufficient support in the House of Commons.

“Sterling is moving higher but has pared back its more convincing gains from earlier in the session, trading modestly in the green against the dollar, euro and Japanese yen.

“Despite attempting to regain ground in recent sessions, cable (GBPUSD) is still down by more than 17% since the start of the year, causing pain for UK importers and adding to Britain’s inflationary conundrum.

“The Chancellor’s mini-budget sparked a major sell-off in the UK gilt market last week, prompting emergency intervention from the Bank of England.

“The dysfunction in the bond market has forced the Bank of England to carry out conflicting policies; one to stem inflation and another to avoid financial contagion.

“It is having to buy long-dated gilts to prop up its sovereign bonds and the pound.

“Meanwhile it is likely to carry out a jumbo 100 basis point hike next month as it looks to rein in economic activity to stem inflation. This push and pull underscores the UK market’s disorder at the moment.

“Meanwhile on Friday, ratings agency Standard & Poor’s cut Britain’s sovereign debt rating from ‘stable’ to ‘negative’ and said it expects the UK to enter a technical recession in the coming quarters, shrinking by 0.5% in 2023.”