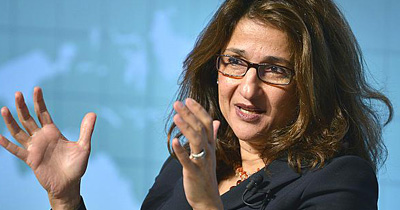 The Edinburgh-based David Hume Institute has announced that Nemat Shafik, one of the most influential women in global finance, will speak at its 30th anniversary dinner at Edinburgh’s George Hotel on September 22.

Shafik is a deputy governor of the Bank of England, the UK’s central bank, where she is responsible for reshaping the bank’s operations and balance sheet, including an eventual exit from the BoE’s controversial £350 billion “quantitative easing” bond-buying stimulus programme.

Shafik was the youngest ever vice president of the World Bank at the age of 36 and was a deputy managing director of the International Monetary Fund (IMF) from 2011 to 2014 where she was responsible for the IMF’s work in Europe and the Middle East as well as the IMF’s $1 billion administrative budget.