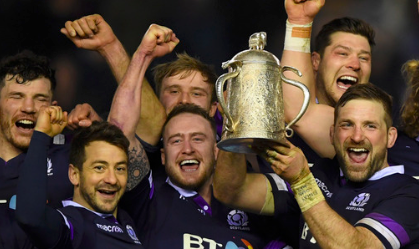 “There have been notable successes on and off the pitch in the past year with a raft of new sponsors aligning themselves with the sport at all levels, coupled with unprecedented support for the Scotland at the national stadium, with BT Murrayfield taking its run of sell-out matches to 14,” said Scottish Rugby.

“Over 400,000 fans attended the six sold out matches at the national stadium this year, making it the most successful ever season for total attendance at Scotland matches.

“The increased revenue has been used to maintain record levels of investment into the domestic game in Scotland with a further £3.1 million in the past 12 months, taking the money delivered to the grassroots game to £14.5 million in the last five years, compared with £9.7 million in the previous five.

“The Scotland national team secured a dramatic draw in the Calcutta Cup match of the 2019 Guinness Six Nations and retained the historic trophy for the first time in 35 years.”

Glasgow Warriors had another strong Guinness PRO14 season and narrowly missed out on lifting the title at the final at Celtic Park, in front of a record crowd of almost 50,000 fans.

Scottish Rugby chairman Colin Grassie said: “I am pleased to report that since our last AGM our turnover has grown once again by £3.9m to a record £61m following an increase in our ticketing, broadcast, and other rugby income.

“We are also pleased to report that we are in our best net year-end cash position for over 25 years, as a direct result of balanced and sustainable financial management of the organisation – reducing debt while working to increase incomes and investment in all areas of the game.

“We are now in a new era financially and in a far stronger position.”

Scottish Rugby president Dee Bradbury said: “Commercial success is vital in order to develop rugby in Scotland from the grassroots game to the international stage.

“As I have travelled the country in the past 12 months I have seen the commitment of club members, volunteers, officials, players and their families and friends and so it is hugely positive to be able to report the strong position Scottish Rugby finds itself in.

“It is important we continue to build sustainability into our game in Scotland and it is pleasing to see the volume of investment going into our club game to support the running of clubs and enhancing facilities.

“There is a sense of positivity about rugby in Scotland just now, on the eve of the World Cup, and I hope this will carry into the new season for the game at all levels.”

Scottish Rugby chief executive Mark Dodson said: “There has been considerable work across the whole organisation to put us in this strong financial and operational position.

“I would also like to thank our sponsors and partners for their continued support and I believe we are a good business to be involved with and work hard to deliver for all our stakeholders.

“The importance of a successful Scotland team cannot be under-estimated in underpinning our revenues and the incredible support the team has generated in recent years is hugely appreciated.

“To ensure we achieve success on the pitch it is vital our pathways to the elite level of the game remain competitive and credible.

“Therefore it is vital we have a vibrant and well-resourced club game at professional and domestic level.

“The current net cash position now creates a solid platform for us to continue our significant investment in all levels of the game to ensure our teams improve, our facilities reflect a modern, inclusive sport and we can continue our recent growth.”