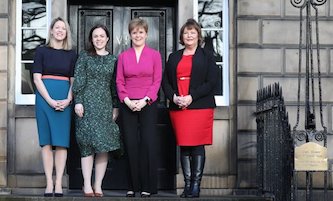 Michael Russell’s responsibilities will be expanded as Cabinet Secretary for the Constitution, Europe and External Affairs.

Fergus Ewing will take on responsibility for tourism as Cabinet Secretary for Rural Economy and Tourism.

Jenny Gilruth has been nominated to join the Government as Minister for Europe and International Development, where she will support Russell.

Ben Macpherson will move to join the finance team as Minister for Public Finance and Migration.

The First Minister will propose the appointment of Forbes to Cabinet and of Gilruth as a Minister to the Scottish Parliament on Tuesday.

Sturgeon said: “These appointments bring new talent into government and deliver a real focus, not only on driving forward our economy, but also on addressing the challenges of Brexit, increasing our population and ending Scotland’s contribution to the climate crisis.

“I am pleased to make these appointments and — in particular — to be able to put Scotland’s finances and Scotland’s economy into the hands of two incredibly talented colleagues.

“Fiona Hyslop has been an outstanding Cabinet Secretary, delivering a successful expansion of Scotland’s overseas presence and recognition, supporting our booming tourism industry and demonstrating the huge importance of culture – not just to our economy, but more importantly to who we are and how we see ourselves.

“I know she will bring that drive, passion and sharp focus to Scotland’s economy.

“Working alongside Kate Forbes as the Cabinet Secretary for Finance, she will continue to drive forward our economy, support our key industries and maintain Scotland’s long tradition as an outward-looking, dynamic and enterprising nation.

“Ben Macpherson will continue to make the case for Scotland to have a distinct migration system in order to meet our economic, social and financial needs – and as Public Finance Minister will also take the lead on identifying ways to fund climate action, and he will work across government to build a wellbeing economy.

“Jenny Gilruth will join government for the first time – having proven herself as a talented and hard-working MSP – and takes on the role of Minister for Europe and International Development.

“She will have the important task of promoting Scotland, building new links in a post-Brexit environment and delivering on our global responsibilities – and I know she is more than up to that challenge.”