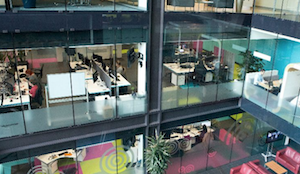 Edinburgh-based Skyscanner Ltd, the travel-booking firm owned by China’s Trip.com Group, is preparing to cut up to 20% of its workforce and close some offices because revenues have collapsed during the Covid-19 lockdown, Bloomberg News reported.

The report said Skyscanner intends to consolidate its operations in the UK, close its Sofia and Budapest offices and reduce its presence in Singapore and Miami, citing an internal email from CEO Moshe Rafiah seen by Bloomberg News.

Skyscanner — based at Edinburgh’s Quartermile development in Lauriston Place — anticipates “that of our 1,500 Skyscanner employees around 20% may leave us,” the CEO wrote.

Of the 300 or so jobs cut, about 80 roles could be affected in Edinburgh.

Rafiah held a conference call with 1,200 of the company’s employees on Tuesday before sending out the message.

“While we’re confident of Skyscanner’s recovery in the long-term and we’re seeing early signs of growth in the sector, we now know it will take longer than originally anticipated for travel to return to normal,” said a Skyscanner spokesperson.

Trip.com, formerly known as Ctrip, acquired Skyscanner in 2016 for $1.7 billion.

Skyscanner’s main offices are in Edinburgh and London.