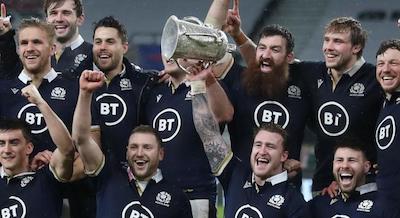 Private equity firm CVC has announced a “long-term strategic partnership” with Six Nations Rugby through which it will invest up to £365 million for a 1/7th share in the business.

The rugby unions of Scotland, France, Wales, Ireland, Italy and England will together retain a 6/7th share.

The allocation for Scottish rugby will be up to £44.5 million if Six Nations Rugby meets future financial performance conditions.

Scottish Rugby said: “Today’s announcement marks an important step in the evolution of the Six Nations as a tournament and one that Scottish Rugby was proud to play a role in.

“Bringing in a significant external partner is the result of many years of hard work in developing the tournament and recognition of its value and future.

“It provides a great opportunity to take the tournament forward and build on its success to date.

“The arrival of CVC is a timely and strong expression of confidence in rugby and one which will directly benefit the wider game in Scotland in years to come.

“The proceeds generated from this partnership are spread over a period of five years.

“Scotland will also benefit from an increased commercial focus on the competition as a result of the partnership with CVC.

“Scottish Rugby’s Board and Council will take their time to determine how best to utilise this future income, having both backed the proposal to bring CVC on board.

“We look forward to working with CVC and our fellow Unions to continue to ensure the Six Nations remains the iconic and valued tournament it is today.”

CVC has $117.8 billion of assets under management.

“Six Nations Rugby, the official organising body of the Six Nations Championships and Autumn Internationals, is pleased to announce that it has agreed a long-term strategic partnership with CVC Fund VII, subject to customary regulatory approvals,” said Six Nations Rugby.

“The partnership with Six Nations Rugby comes at an exciting time following the newly centralised ownership and operational activities for both the Men’s, Women’s & Under-20’s Six Nations Championships, alongside the Autumn International series.

“The objective of the partnership is to invest to grow and develop the game; to further enhance the sporting spectacle of all the tournaments, the teams and the brands; and to build the data, technology, and broader commercial capabilities to support these ambitious plans …

“Under the terms of the agreement the six unions will retain sole responsibility for all sporting matters as well as majority control of commercial decisions.

“The CVC Fund VII investment into Six Nations Rugby will be paid to the six unions over a period of five years, reflecting the long-term nature of the partnership.

“This capital investment, combined with the expected growth of the tournaments, will help the unions to support the development of rugby at all levels in their respective territories over the years ahead.”

Six Nations Rugby CEO Ben Morel said: “This is a hugely positive development and I want to express my thanks to all parties involved.

“In particular, our six unions and federations, for the strong sense of unity and collaboration they have shown throughout this process to create a unified Six Nations Rugby and agree the partnership with CVC.

“The Six Nations Championship is steeped in rugby tradition, stretching back to 1883, and together with the Women’s, Under-20’s and Autumn International series, is synonymous with all the excitement, passion and competitiveness that rugby has to offer.

“This external investment is an important validation of what Six Nations Rugby has achieved to date and is a key next step as we invest to grow the game on the world stage.”