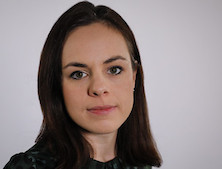 The independent Scottish Fiscal Commission said on Thursday it expects a strong economic recovery in 2021-22, with Scottish GDP growing by 10.4% and economic activity returning to pre-pandemic levels by the second quarter of 2022 — two years earlier than previously thought.

But the Commission cautioned there is some evidence that the Scottish economy has been lagging behind the rest of the UK.

Forbes announced that rates relief for retail, hospitality and leisure businesses would continue at a 50% level for the first three months of the 2022/23 fiscal year.

Forbes said: “This will prevent a cliff edge for businesses in those sectors, saving them a further £56 million in 2022-23.”

Small businesses with a rateable value of less than £15,000 will continue to be exempt from paying business rates for the whole year.

Forbes said the budget also includes “record funding” of £18 billion for Health and Social Care, including £12.9 billion for health boards.

The budget also confirmed the doubling of the Scottish Child Payment to £20 per week, which will be implemented from the start of the 2022/23 year.

The Scottish Fiscal Commission warned there is some evidence the Scottish economy has been lagging behind the rest of the UK.

“Scottish income tax revenues have fallen behind the Block Grant Adjustment – the amount subtracted from the Scottish Budget to account for the devolution of tax revenues – with a shortfall of £190 million anticipated in 2022‑23,” said the Commission.

“This shortfall is expected to reach £417 million by 2026‑27, driven by slower growth in employment in Scotland compared to the UK.

“The largest new payment, Adult Disability Payment, launches in 2022, while Scottish Child Payment will be doubled to £20 per child each week from April 2022 and extended to children under 16 by the end of 2022.

“As a result the Commission expects spending on the Scottish Government’s largest social security payments and completely new payments to be £750 million more than the social security funding received as part of the Block Grant by 2024-25, reducing the funding available for other spending priorities.”

Scottish Fiscal Commission chair Susan Rice said: “After taking account of inflation we expect the Scottish Budget to increase by 1 per cent in total over the remainder of this Parliament, largely because of increases in UK Government funding.

“Behind this headline increase, the Scottish Government faces slightly slower growth in income tax revenue than the rest of the UK but faster growth in social security spending.

“These will create pressures over the next five years which the Scottish Government must manage carefully.”

Fraser of Allander Institute said: “Perhaps the biggest surprise of the budget was how quickly Kate Forbes decided to roll back non-domestic rates reliefs for businesses in retail, hospitality and leisure.

“This year, these businesses have received full reliefs on their bills, at a substantial cost to the government of £736m.

“Kate Forbes was expected to use the budget to signal a rolling back of the reliefs in 2022/23. But the speed of the roll-back came as a surprise.

“RHL businesses will be eligible for a 50% relief, but only for the first three months of the financial year; moreover there is a cap on the amount of relief by the taxpayer.

“This policy is less generous than in England, where 50% reliefs will be available for the whole financial year for eligible businesses.

“On this, the government has prioritised its aspirations for public services spending over calls from business organisations to continue the relief for longer.

“For a transitionary budget the relief is removed more abruptly than many had anticipated. But the government may have been persuaded by arguments that, the longer the reliefs are maintained, the lower their likely economic impact …

“This was a budget that largely conformed to expectations. A big increase in health and social care funding accounts for a substantial share of the spending increase on last year, and a big emphasis was placed – rightly – on the government’s flagship and distinctive policy to reduce child poverty although more will no doubt be needed if the statutory child poverty targets are to be met …

“But there was disappointment too in the significant downward revision to the income tax forecasts compared to just a few months ago.

“Kate Forbes will have hoped that the SFC might deliver some sort of fiscal windfall – the like of which the OBR often seems to grant UK chancellors.

“But rather than finding extra money down the back of the sofa, the SFC forecasts make for a disappointing outlook, both in 2022/23 and beyond.”

Vishal Chopra, KPMG UK’s Head of Tax in Scotland, said: “Growing uncertainty around the pandemic meant this was a Budget of difficult choices that remained some way from feeling like business as usual.

“Kate Forbes unwrapped a package of public investment aimed at forecasting what level of support Scotland’s economy will need next year to recover.

“Rising inflation, challenging business conditions and issues around climate were all front of mind in a transitional budget which offered some early stocking fillers for businesses.

“100% uncapped relief from Business Rates has been available for certain Scottish businesses in retail, hospitality, leisure, and aviation for 2021/22, and so today’s announcement to give businesses in retail, hospitality, and leisure a 50% business rate relief for the first three months of 2022/23, albeit capped at £27,500 per rate payer, will provide a little extra comfort to businesses still dealing with the impact of COVID-19.

“Land & Buildings Transactions Tax (LBTT) rates and bands will remain unchanged for both residential and non-domestic properties, and the Government will shortly launch a call for evidence and views on the operation of the Additional Dwelling Supplement which remains unchanged at 4%.

“Noticeable omissions were any changes to encourage environmentally friendly improvements, or an update on the devolved Air Departure Tax, which feel like missed opportunities given the Government’s focus on advancing its green agenda and net zero targets.

“There was, however, confirmation of investment in energy transition and industrial decarbonisation projects, and landfill tax rates are to increase to maintain alignment with the rest of the UK.

“Other notable green announcements included the expansion of the Business Growth Accelerator relief for property improvements to include the installation of solar panels as a qualifying improvement.

“On income tax, the Starter and Basic Rate bands will increase with inflation, while the Higher and Top Rate thresholds will remain frozen in cash terms.  This is estimated to raise an additional £106 million in 2022-23.

“This was a Budget which aimed to pave the way for the Government’s long term ambition of a fairer, greener future.

“A Resource Spending Review to be released in May 2022 will set out the Government’s long-term funding plans and the roadmap for delivering key commitments.

“For now though, many will be left wondering whether more could have been done to provide further support on the route to economic recovery, with many businesses undoubtedly feeling that their wish lists will remain unfulfilled this Christmas.”

“Many businesses are already expressing disappointment and shock that the future relief doesn’t match what has been announced by the UK Government.”

Scottish Licensed Trade Association (SLTA) managing director Colin Wilkinson said: “Just when hospitality businesses were beginning to get back on their feet, along comes the Omicron variant to throw a spanner in the works so the news in today’s Scottish Budget is a welcome step towards aiding our recovery, but more targeted support will be needed.

“People are understandably nervous about going out and about pre-Christmas and despite the efforts of the sector to provide a controlled and one of the safest environment settings as possible, this has resulted in a raft of cancellations of festive drinks, lunches and nights out.

“And retail and hospitality businesses outside the scope of this help will recognise that ongoing, though reduced, support for their sectors is better than a cliff-edge withdrawal.

“However, there’s a compelling case to further extend the duration and level of this relief for independent operators especially if we’re not out of the woods by the spring.”