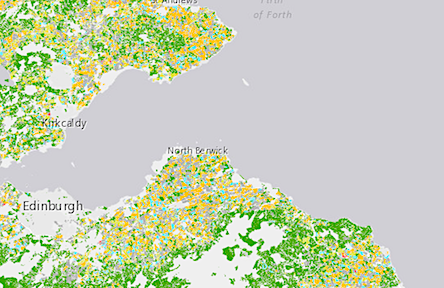 Farmland values in Scotland rose at a faster rate than elsewhere in the UK in 2021 “with demand for land proving extremely strong” according to latest research from Strutt & Parker.

Analysis of data from the past 12 months shows “unprecedented levels of interest” in farmland in Scotland during 2021, which resulted in a robust upwards movement in prices.

“Farmers are still the main investors in farmland in Scotland, but newer entrants such as forestry, ESG and lifestyle buyers are increasing,” said Strutt & Parker.

“This has resulted in rising competition in a market where demand already outstrips supply.”

Arable land values varied greatly depending on location and capability, with an average value for prime arable land at around £7,000/acre, up from £5,800/acre in 2020.

“This part of the market is somewhat underpinned by farmers with rollover money to invest, especially in areas of proximity to expanding settlements.

“Over the past two decades, the value of prime arable land has increased by up to 550%.”

The price of pasture land with afforestation potential also continued to increase in 2021 because of demand from forestry buyers responding to the increasing value of timber and other green investors — often referred to as Environmental, Social and Governance (ESG) buyers — looking for land with carbon-capture or rewilding potential.

Rough grazing or hill land that is suitable for tree planting achieved prices of between £2,500/acre and in excess of £5,500/acre, compared with £200-£2,000/acre for land unsuitable for forestry planting.

Strutt & Parker’s analysis shows the amount of farmland which came to the market was 27,300 acres in 2021, significantly higher than in 2020, but still below the five-year average.

“Looking forward the supply of farmland to the market is likely to increase, with some farmers considering retiring early, in part because of policy changes facing the agricultural sector, but also due to the strength of the market and the high prices being paid,” said Strutt & Parker.

“Yet demand is likely to continue to outstrip supply.

“In recent months we have spoken to several potential purchasers from abroad who are interested in buying farmland in Scotland.

“We expect them to become more active in the market as Covid-19 restrictions are eased further.

“We also expect that ESG and forestry buyers will increase proportionately.”

It was announced in December that Strutt & Parker will provide data and insight for a major report which has been commissioned by the Scottish Land Commission to gain a greater understanding of how increased demand for natural capital investment is driving activity in the land market.

The report aims to provide an evidence base for policy makers to address the risks and opportunities associated with growth in demand for carbon and other natural capital assets in Scotland.