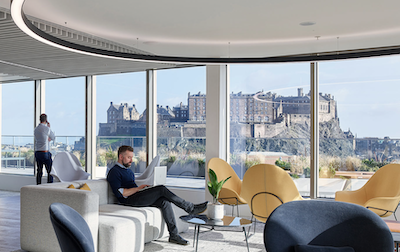 Almost half of Scottish workers are spending at least one day a week working at home, new figures have revealed.

Across Scotland, 38.3% of staff never work at home, the study found.

The Office for National Statistics data was gathered in the two weeks to August 21, and surveyed a total of 9,207 firms across the UK.

Hybrid presentation expert and former MSP Gavin Brown, director of Edinburgh-based Speak With Impact, said the new numbers showed habits which developed as a result of the pandemic were here to stay.

Brown said: “Unless you work every day in the office, or indeed every day at home, you are a hybrid worker.

“These figures show us that now accounts for about half of all workers in Scotland, and it illustrates just how drastically things have changed in a couple of years.

“This transformation in working and business environment must be adjusted to, and holds a great deal of opportunity.

“But pitching, collaborating and performing in a hybrid world requires an entirely different set of skills which, prior to the Covid pandemic, almost nobody had.

“If Scottish businesses can excel in this hybrid world by maximising in-person and virtual opportunities in tandem, it could provide a real boost to our economy and to individual prospects generally.

“Other parts of the developed world are doing this now, and it’s essential Scotland and the wider UK does not get left behind.”

The statistics were revealed in the Office for National Statistics’ Business Insights and Conditions Survey between August 8 and 21, Wave 63 edition.