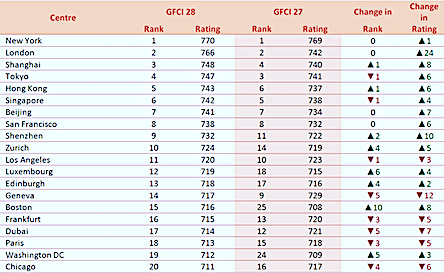 Edinburgh has been ranked fourth in Europe in the latest Global Financial Centres Index (GFCI 28) launched on Friday by influential London think tank Z/Yen Group in partnership with the China Development Institute (CDI).

In Europe, only London, Zurich and Luxembourg rank ahead of Edinburgh in the new index.

The improved GFCI ranking came as the UK’s Investment Association (IA) produced its latest report showing total assets under management by IA members reached a record £8.5 trillion in 2019 — and that among UK-headquartered investment managers, 20% of assets are managed by firms with headquarters in Scotland.

Professor Michael Mainelli, executive chairman of Z/Yen, said: “GFCI 28 shows increased confidence in the leading financial centres, but a general reduction in confidence in other centres.

“Uncertainty about trade, political stability, and the economic impact of the covid-19 pandemic has injected more volatility into the index results.

“New ways of working are challenging the concept of a traditional financial centre.

“For example, the physical City of London has had an economically torrid covid-19, while financial services in SouthEast England have had a bumper year.”

The GFCI is updated regularly and ratings change as assessments and instrumental factors change.

The GFCI is updated every March and September and receives considerable attention from the global financial community.

The index serves as a valuable reference for policy and investment decisions.

The Global Financial Centres Index was created in 2005, first published in 2017, and published every six months since.

In July 2016, Z/Yen and the China Development Institute (CDI) in Shenzhen established a strategic partnership for research into financial centres.

The Investment Association said in its report: “Although the City of London remains the leading centre of investment management activity in the UK, Scotland, and particularly Edinburgh, plays a key role nationally.

“At the end of 2019 total assets managed in Scotland by IA members stood at 7%, equivalent to £590 billion.

“This proportion is unchanged year on year but represents a £60 billion increase in nominal terms compared with 2018.

“Among UK-headquartered investment managers, one fifth (20%) of assets are managed by firms with headquarters in Scotland …

“UK managed assets have become increasingly dominated by firms headquartered in London, a trend that has accelerated in 2019 due to M&A activity in Scotland.

“Many IA members headquartered in Scotland undertake investment management activity in other regions, primarily London, which is why there is an imbalance between Scottish managed assets and location of firm headquarters.

“This is consistent with the data collected on staffing levels, which clearly shows that London is more likely to be a location for portfolio manager jobs than other areas of the UK …

“In our interviews with members this year some senior figures have suggested that we might see an increase in regional offices outside of the city clusters as a consequence of the operational changes caused by the pandemic.

“The shift to working from home through the crisis has called into question the need for and use of office spaces.

“It remains to be seen whether there will be long term consequences of the decentralisation of work spaces in 2020.”